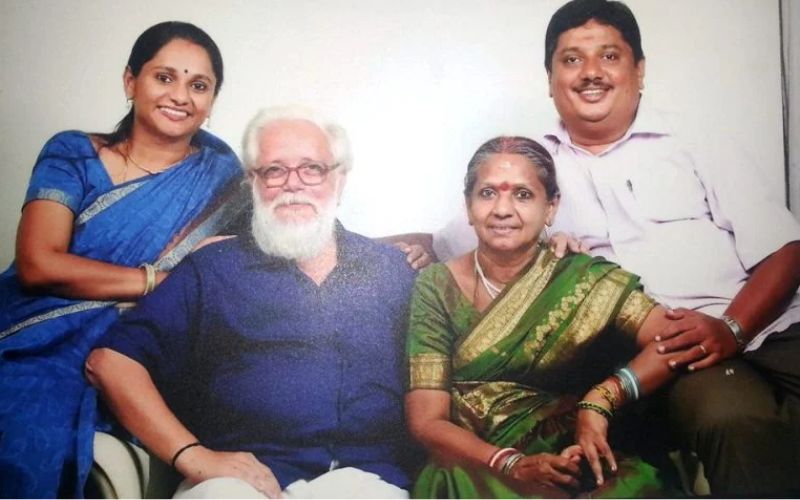 Nambi Narayan has been on everyone’s mind after the release of R Madhavan’s directorial debut movie “Rocketry: The Nambi Effect.”

This film has rocked its audience to their core after hearing about the wrongly accused ISRO scientist.

The audience not only focused on the hardships of Nambi Narayan but also on his wife Meena Narayanan.

Meena and Nambi were married with two children when the worse phase of their life began.

The widespread anger against Nambi that was rooted in the false accusations of him sharing the rocket designs from ISRO to Pakistan was enough to shake his entire family.

Not much is known about this woman.

She is a simple housewife who was thrown under the bus after the arrest of her husband.

In an interview nambi pointed out the effect of the charges and allegations on his wife, he says “People would come to my house and burn my effigy call me names, shout slogans….my family suffered a lot. My children would get agitated and fight back but my wife had slipped into depression and stopped talking.”

In an interview with BBC, he describes the chilling effects of such allegations on his better halve saying He went upstairs to break the news to his wife. “She was sleeping on the floor in a dark room, and responded only after he called out her name twice.” “She turned around slowly, raised her head and stayed still, staring into my eyes. She had a strange expression as if she was watching me doing something horrible,” Mr Narayanan recounted.

“Then she let out a shriek that I had never heard – from a human or an animal.”

The cry coursed through the house. Then she fell silent.

The above intense passage shows the amount of trauma the lady was going through.

Yet through all of this, she stood solid with her husband.

She got this courage because she had immense trust in Nambi that he is a true patriot.

Her humiliation in society is something that bought tears in the eyes of any citizen.

An immensely spiritual person, and was rejected Prasadam (sacred to any temple goers) because of the allegations surrounding she decided to never visit that temple again because of this humiliation.

She chooses her husband over the temple which shows the amount of trust that this couple had.

This is in no way the only time she is humiliated.

Nambi reveals that once Meena was removed from an autorickshaw in midst of pouring rain when the driver came to know about her identity, she was left alone in that rain.

She was further humiliated at a wedding because of the allegations while her children suffered fates like her daughter was assaulted by someone who threw cow dung at her while her son was beaten up by people.

She was even ostracised by the housing complex she lived in, neighbours turned against her due to which she suffered a lot.

She was let down by everyone she held close and dear, she was shunned by the religious authority that she wanted the most support from while she faced humiliation from all sides for an alleged crime that allegedly her husband had done.

Despite all of this she never let the trust between them break and continued her life by being the support the husband needed at that time.

Her sacrifices helped her family to get through the rough patch.

Credits:- The BBC, Wiki Bio, The Print and She the People Tv