“A Girl whose dancing legs are climbing now”. 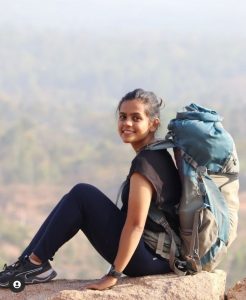 The Recipient of the Tenzing Norgay Adventure Award, Priyanka completed her expedition to Mount Kanchenjunga (8,586m), the third Highest Mountain on the Planet. She attained this milestone at around 4:52 pm, on 5th May, 2022 as reported by NDTV.

Who is Priyanka Mohite?

Mountain Bandra panch, a mountain massif in the Garhwal Himalaya Uttarakhand was the first mountaineering she undertook, thereafter she was given a chance of climbing Mount Everest.

Mohite came across a peak called Mount Lhotse which had an elevation of 8,516m while on the way to Mount Everest. However, her mission was called off in 2014, due to an accident that claimed the lives of 16 people of Mongolian origin living on the southern slopes of the Himalayas in Nepal. After an earthquake in Nepal, the following year, the climber escaped with minor injuries. However on the 16th of 2018 Mohite ultimately reached the top making the Second 8000 m peak.

Priyanka Mohite made history by becoming the first Indian woman to summit Mount Makalu, in the year 2019.

In 2021, she summited Mount Annapurna 8,091m. It is the 10th Highest mountain peak in the world. Priyanka became the first woman climber to do so.

In 2013, she summited Mount Everest, the world’s tallest peak.

On 13th November,2021 She was Awarded Tenzing Norgay Adventure Award by the President of India, Ramnath Kovind. She was awarded Shiv Chhatrapati Adventure award for adventure sports for 2017-18, and was also honored for the achievement and contribution in the field of outdoor adventure and mountain climbing.