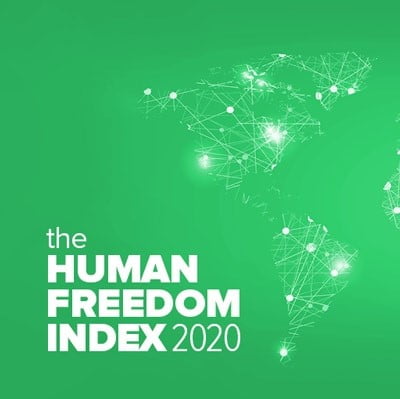 The #worldwide ranking of #civil, #economic and #PersonalFreedom released on Thursday has placed #India at the 111th position out of 162 countries. Though ahead of #China and #Bangladesh, which ranked 129 and 139 respectively, India has dropped its position in #HumanFreedomIndex 2020 from 94th rank in 2019 to 111th rank. India was ranked 110 in terms of personal freedom and 105 on #EconomicFreedom, with an overall score of 6.43 out of 10.

#NewZealand, #Switzerland and #HongKong bagged the first three spots. #FredMcMahon and #IanVásquez, the authors of the report, said that they expected Hong Kong’s rank to decline in the future, given China’s constant “aggressive interventions” in the region between 2019 and 2020.

The index was published by #CatoInstitute in the United States and #FraserInstitute in Canada. It includes 76 indicators of personal, civil, and economic freedoms to rank 162 countries from 2008 to 2018. The institutes noted that the world has seen a notable decline in personal freedom since 2008. They said,

“Overall freedom has also declined, though to a lesser degree, over the same time period….Of the 12 major categories that we measure in the report, all but five have seen some deterioration, with freedom of religion, identity and relationship freedoms, and the rule of law seeing the largest decreases.”

Both #UnitedStates and #UnitedKingdom have bagged 17th rank on the index, while the war-conflict region of #Syria is ranked last on the list. Further. the index has put #Pakistan at 140 rank.

“The report continues to find a strong, positive relationship between freedom and prosperity, but also finds that there is an #UnequalDistribution of freedom in the world. Fifteen per cent of the world’s population lives in the freest quartile of countries in the index, while 34 per cent lives in the bottom quartile of countries. The gap in freedom between the most free and the least free countries has also been increasing since 2008,” the authors said.

The Human Freedom Index (HFI) presents a broad measure of human freedom, understood as the absence of coercive constraint. On a scale of 0 to 10, where 10 represents more freedom, the average human freedom rating for 162 countries in 2018 was 6.93. This sixth annual index uses 76 distinct indicators of personal and economic freedom in the following areas:

• Regulation of Credit, Labor, and Business

“This index is thus an attempt to measure the extent to which the #NegativeRights of individuals are respected in the countries observed. By negative rights, the authors refer to freedom from interference—predominantly by #government— in people’s right to choose to do, say, or think anything they want, provided that it does not infringe on the rights of others to do likewise. These rights protect freedoms such as freedom of religion, freedom of speech, freedom of assembly, sexual freedom, economic freedom, and so on”, says the Report.

India has dropped on several global freedom indexes. #Democracy #watchdog #FreedomHouse’s report in October showed that internet freedom in India declined for a third straight year in 2019-20. The Global Economic Freedom Index 2020 released in September showed India drop 26 spots from 79 to 105. The #WorldPressFreedom Index, which was released in April, saw India slip two places. India ranked 142 on the index comprising of 180 countries and territories.