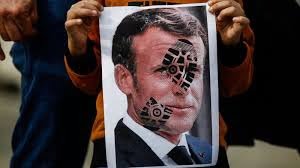 France as a country has had a complicated relationship with the #Islam community. #France is observed to have the largest population of the community and it is also the country that follows the Islam religion at the number 2 position. However, France also has been facing a number of terrorist attacks by the extremists of Islam.

On the 16th of October 2020, an 18 year old, recognized as Chechen beheaded a school teacher. Chechen, identified as a refugee to the country was born in Moscow. He has been caught and shot dead by the French police. On the regards of this, the French president’s comments have attracted a lot of displeasure from the Muslim community all over the world.

Schoolteacher #SamuelPaty was beheaded by the identified teenager on the basis of the teacher using the caricatures of Prophet Mohammed in his classes. These caricatures first published in the satirical magazine Charlie Hebdo has been used by the teacher to speak about freedom of speech in one of his classes.

Reacting to this, French president Emmanuel Macron has commented that, this was an #IslamistTerrorAttack, while he spoke about the bill to address the Islamic radicals. It is claimed by the authorities in the country that these radicals are causing the building and promotion of a #ParallelSociety that is ought to break the country into two halves. This parallel society is that which doesn’t adhere to the values of the French republic.

Another incident related to this is the 2015 terror attacks on the headquarters of Charlie Hebdo and the kosher supermarkets by French born Islamic extremists. At the trial, the president had commented that the authority is trying to get rid of the parallel society. It has been recollected that the caricatures printed in the Charlie Hebdo is what caused all these attacks in the first place. This terror attack had resulted in the death of twelve people.

During his speech, Macron observed that the “right to blaspheme” was included in the right to freedom of speech in the Republic of France. Macron spoke about the process of #separatism that he claims exists in the neighbourhoods of France where the radical members of the Islam community are targeting the nearby locals so as to inculcate the beliefs of their faith. He even commented that the “The problem is an ideology which claims its own laws should be superior to those of the Republic.”

Following these comments, many countries have expressed their disappointment with the statements. Turkey was the first country to react and the president Recep Tayyip Erdogan commented, “What is the problem of this person called Macron with Muslims and Islam? Macron needs treatment on a mental level”.

As a result of this war of words, many other countries such as Kuwait, Saudi Arabia, Jordan and Pakistan have expressed their displeasure. Actions such as removing French products and boycotting Carrefour grocery chain have been observed.

Hashtags such as #BoycottFrenchProducts, #MacronApologizetoMuslims and #NeverTheProphet have been trending on social media as citizens and leaders of many countries have taken to twitter to express their opinions.

Imran Khan, Prime Minister of Pakistan has tweeted that “Hallmark of a leader is he unites human beings, as Mandela did, rather than dividing them. This is a time when Pres Macron could have put healing touch and denied space to extremists rather than creating further polarisation and marginalisation that inevitably leads to radicalisation”.

Javed Zarif, foreign affairs minister of Iran also expressed his opinions on the statement by Macron saying that “Muslims are the primary victims of the “cult of hatred” – empowered by colonial regimes and exported by their own clients. Insulting 1.9B Muslims – and their sanctities – for the abhorrent crimes of such extremists is an opportunistic abuse of freedom of speech. It only fuels extremism”, he said. Protests against France were also organized in Syria, Libya, Gaza, Iraq and Bangladesh.

WHAT YOU NEED TO KNOW ABOUT THE MUNGER RIOTS