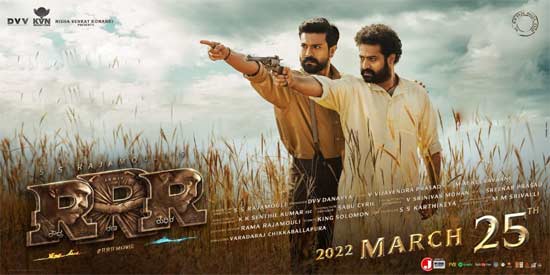 Ahead of the much-anticipated release of SS Rajamouli’s RRR, starring Jr NTR and Ram Charan on March 25, the hashtag #BoycottRRRinKarnataka has been trending on Twitter.

Having humongous expectations from fans with the hype created for the film. Fans and Netizens from Karnataka are extremely disappointed with the cast and crew of RRR for giving less preference to the Kannada version of the film. Throughout Karnataka, less number of shows have been allotted to the Kannada version of RRR while the Tamil, Telugu and Hindi versions of RRR have been allotted more screens .

Most of them were of the view that RRR not giving attention to Kannada is a big insult to Kannadigas. Some of the fans demanded the team to allot more screens for the Kannada version of RRR as it would reach the audience in rural parts of the state.

#RRR is releasing only in Telugu in #Bengaluru #Karnataka.@ssrajamouli said that it would be otherwise.

But this is Anti Kannada stance by the whole RRR team. @KannadaGrahaka

The netizens have also accused the makers of RRR of disrespecting Kannada Superstar Dr Shivrajkumar’s request. The actor had attended the promotions of the film in Bengaluru and had personally appealed to the team to have as many shows of the film in Kannada as possible.

KVN Productions, the distributors of RRR in Karnataka had put out a statement yesterday. saying that they are taking all efforts to bring in more screns for the Kannada version. The statement said “We understand that you would love to witness the magnum opus in Kannada language. Hence, the convincing act with reluctant theatre owners to play the Kannada version of RRR is in full swing,” The production house also added that the lead actors have put special efforts to learn Kannada and dub in their own voice for the first time.

RRR is all set for a grand release on March 25 in five languages. The two main leads have been crisscrossing across the country to promote the film. The film which was earlier supposed to be released on 7th January 2022 was postponed following the third wave. The film which has been in production since 2018 had faced numerous delays due to the Covid-19 pandemic and will release in Telugu, Tamil, Kannada, Malayalam and Hindi

Said to be produced with a budget of 450 crores. RRR is a fictional period war drama based on the lives of Telugu freedom fighters, Alluri Seetharama Raju and Komaram Bheem. Jr NTR will be seen playing the role of Komaram Bheem while Ram Charan plays Alluri Seetharama Raju. Also starring Alia Bhatt and Ajay Devgan in extended cameo roles. Alison Doody, Ray Stevenson, Olivia Morris and Samuthirakani will be seen playing supporting roles.

The Allu Arjun-Rashmika Mandanna starrer Pushpa: The Rise had also found itself in controversy a few days before its release had also faced calls for boycott in Karnataka for having few shows in Kannada in Karnataka.