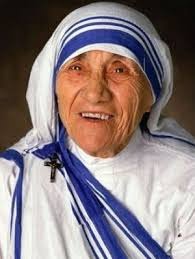 Today marks the 110th birth anniversary of #MotherTeresa or St. Teresa. Born in 1910, in Skojpe, Macedonia, Ottoman Empire, her original name was Agnes Gonxha Bojaxhiu. She moved to Ireland after spending 18 years in Skopje and then moved to India where she is known for her work towards destitute specifically in Calcutta. She founded the Order of the #MissionariesofCharity, a Roman Catholic congregation of women in 1950, which as of 2012 had over 4,500 nuns and active in 133 countries, dedicated to the service of the underprivileged.

After coming to India in 1929, she lived in Darjeeling for some years before taking her solemn vows in 1937 in Calcutta. She was deeply disturbed by the Bengal famine of 1943. In 1946, on a train journey to , Teresa is said to have experienced an inner calling that made her feel like she should serve the poor and destitute and thus she started working towards the cause in 1948 and since then she was always seen as an epitome of kindness, clad in a white cotton saree with blue line borders. She opened schools, hospices, orphanages and healthcare facilities under Missionaries of Charity. In these centres, people suffering from leprosy, AIDS, alcoholics, homeless persons, and victims of natural calamities and people suffering from physical disabilities were sheltered.

Mother Teresa was the recipient of #NobelPrize for Peace in 1979 and India’s highest civilian award #BharatRatna in 1980. She also received the Ramon Magsaysay Peace Prize in 1962. While she has been praised for her life’s work all over the world, she has also attracted criticism due to some of her controversial opinions on abortion, contraception etc. According to some reports, in spite of receiving millions of dollars in donation, her clinics lacked medical care, systematic diagnosis, necessary nutrition and sufficient medicine for the people in pain.

Indians have also not held back while criticising Mother Teresa. #fraudTeresa and #TeresaNoSaint trends on Twitter every year during her birthday (26th August) and death anniversary (5th September). It is believed that Teresa dedicated her life to her work in India, but why some groups of people in the country call her out every year? Well according to their tweets, she was a “sadistic person and ran a concentration camp in Kolkata where there were no medical facilities.” They have also accused her of harvesting organs in her clinics before their death. She is also accused of converting “innocent Hindus into Christianity in the name of social service”. Some of the netizens are upset that us, Indians, defame our own gurus but people like Mother Teresa who were not even that great are being portrayed in our history as a hero. They are also calling her names like “rice bag convertor” (a reference to the allegation that by offering rice to the poor, she converted them into Catholicism).

How did Indians discover these alleged mistakes on Teresa’s part? Where are these allegations sourced from? It is based on several published stories and pieces on various medium. Aroup Chatterjee, an Indian author who worked briefly in one of her homes conducted some financial investigations there. British journalist, #ChristopherHitchens who was one of her biggest critics, published a book called ‘The Missionary Position: Mother Teresa in Theory and Practice’ a book that echoed the accusations made in a documentary based on Chatterjee’s work. Hitchens called her “a fanatic, a fundamentalist and a fraud”. He also alleged that Mother Teresa ordered her members to secretly baptise dying patients in their shelters by asking them if they wanted “a ticket to heaven”. They baptised both Hindus and Muslims and kept it a secret from the world. He has described her organization as a cult that promoted suffering and dint help those in need. He quoted her own words in response to the question “Do you teach the poor to endure their lot?” She replied “I think it is very beautiful for the poor to accept their lot, to share it with the passion of Christ. I think the world is being much helped by the suffering of the poor people.”

Apart from these, she has also been maligned for criticising abortion and contraceptives, her links with industrialists and political parties and for laundering black money. She has also been accused of being a supporter of colonialism and racism by people from across the world. Indian’s accusation of Teresa have mostly been based on Hitchens’s statements. They have taken some quotes from his publications like “Mother Teresa wasn’t a friend of the poor. She was a friend of poverty. She said that suffering was a gift from God”. His reports of Teresa not working to alleviate property but doing it all for the Church and Christ has also aggravated the people to speak against her. These quotes are being used in the posts which are meant to criticise her and condemn her life and work.

While there are critics, there are also a lot of people who defend Mother Teresa. She also receives heaps of praises from another section of Indians who respect her work. From the young politician #SachinPilot to the badminton star #SainaNehwal, a lot of people have remembered her today for all the good work she did. Her famous quotes like “Not all of us can do great things. But we can do small things with great love.” “If you want to change the world, then go home and love your family” are also making rounds on social media today. While some of the criticisms are based on her own words, the others haven’t been proven officially. Hence, Mother Teresa still has a big following who always admire her generosity and charity.