WHAT YOU NEED TO KNOW ABOUT THE MUNGER RIOTS 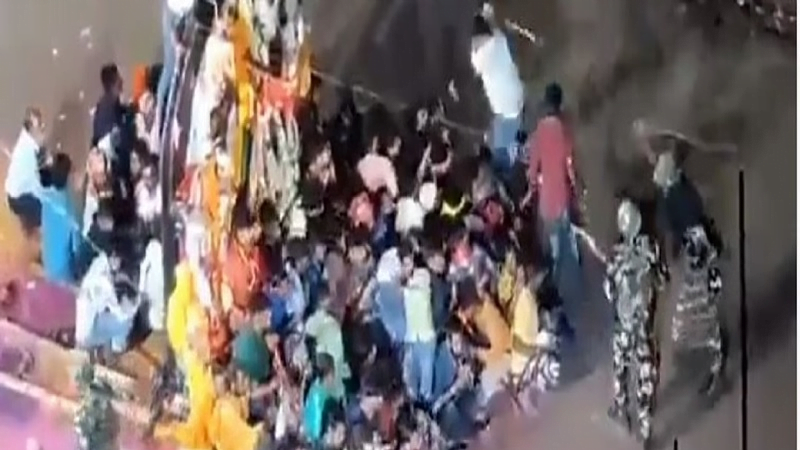 Ahead of the #Biharpolls, a violent clash broke out in Bihar’s #Munger town, between the revellers participating in the immersion of #Durga idols and #Kotwali police personnel on 26th October, 2020. Following the riot, Anurag Kumar Poddar – an 18 year old man was #shot dead on the head and over 27 people were injured in the clash between the police and the mob. Out of which, the Hindustan Times reported that, 20 of them were policemen.

The violent uprisings took place while the organisers allegedly began the processions, along with loud music close to midnight for the idol immersion. As heated arguments began between the participants of the procession and the #police personnel, the latter allegedly roughed up four persons who were carrying the idols on their shoulders. It enraged the participants and sparked off a protest demanding necessary action against the policemen. Later, the mob started #pelting stones and the officials retaliated by a #lathi charge and #tear gas shells.

The Bihar Police also detained over 100 people in relation to the incident and recovered 12 empty cartridges and 3 country made pistols from the spot. The eyewitnesses also said that the police fired 15 rounds in the air to disperse and control the violent mob. Dr Niranjan, the Deputy Superintendent of Munger Sadar Hospital said that, “Seven persons also received bullet injuries while one of them who is critical was rushed to Bhagalpur for better treatment”.

A member of the Durga Idol Committee said that, more than 53 Durga idols were reportedly installed in Munger and the administration insisted on the immersion by 5am Tuesday, in view of the first phase of the #Assembly election on Wednesday. The 20 injured policemen included the SHOs of Sangarmpur, Kotwali, Kasim Bazar, and Basudeopur police stations. The clash continued till 1am, before the administration brought it under control. Later, personnel from the #Bihar Military Police (BMP) and #paramilitary forces were deployed in the affected areas to manage and control the crowd. The police also claimed that it was compelled to fire to disperse the mob, which allegedly retaliated with counter firing.

Following this tense situation around the town, the #politicians gravely condemned police firing. Congress spokesperson Randeep Singh Surjewala shared a video and tweeted: “Will the Bharatiya Janata Party-Janata Dal (United) government thrash Durga worshippers like animals? Will the BJP-JD(U) government kill people for immersing Durga idol. Yes, these images are from Munger in Bihar. First they lathicharged the disciples and then police fired on them.”

The Lok Janshakti Party leader Chirag Paswan said that, “Munger police should be charged with murder,” and tweeted, “Devotees were fired upon in the ‘Taliban-like’ rule of Nitish Kumar. The area Superintendent of Police should be immediately suspended and a FIR should be registered. The family of the victim should be given ₹ 50 lakh and a government job.”

While the Communist Party leader Kanhaiya Kumar also expressed his concern about the situation and called for a strict inquiry against the police personnel, who opened fire on the crowd.

Nevertheless, during the fierce time of #electoral battles, India has witnessed multiple similar violent incidents and riots taking place across the country. Most of the times, ‘#Religion’ has played a significant factor in rising such tensions and protests. However, in the words of the New Zealand Prime Minister, Jacinda Ardern, “You can win election without creating religious conflict amongst your people or War like situation at the Border”.

10 IMPORTANT THINGS YOU NEED TO KNOW ABOUT BIHAR ELECTIONS 2020