A political crisis has emerged yet again in Maharashtra, as the MVA(Maha Vikas Aghadi) faces a challenge from party MLA Eknath Shinde who has apparently rebelled.

Shinde is also the state Minister of Urban Development and Public Works. He has won four consecutive terms in the Maharashtra Legislative Assembly since 2004 from the Kopri-Pachpakhadi constituency.

Security heightened outside the residence of Maharashtra minister and Shiv Sena leader Eknath Shinde, in Thane.

It all started yesterday evening as Eknath Shinde and his group was suspected to have cross-voted during the MLC polls in favor of the BJP. The MVA leadership was busy with the Election Commission over a demand to disqualify two BJP MLAs.

The Shiv Sena-led government came to know about the rebellion only when Shinde and some other MLAs were not available on their phone. 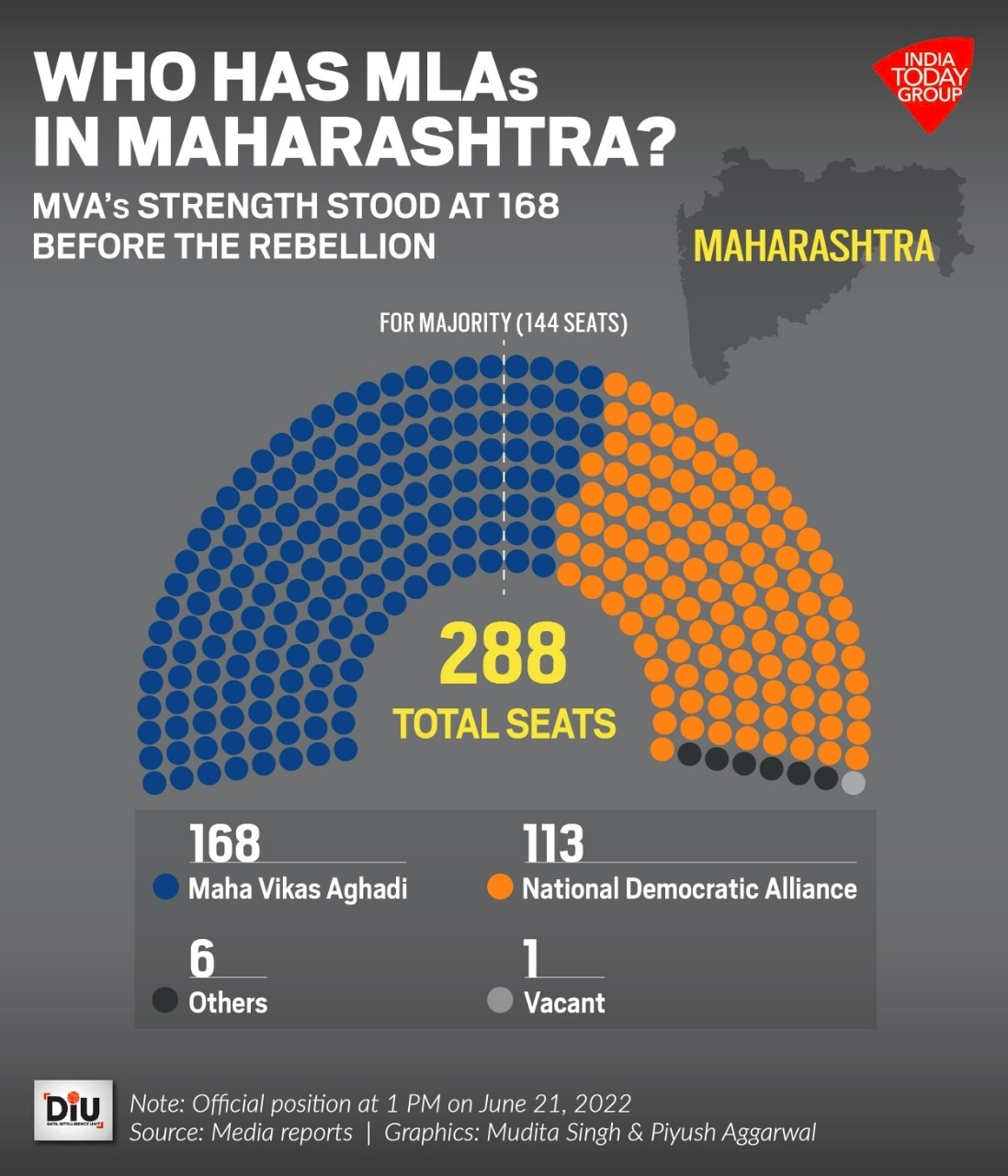 By 2.30 am, calls began going out from ‘Matoshree’, the residence of Uddhav Thackeray. The Shiv Sena then began to round up rest of the MLAs who were planning to go to Gujarat.

Uddhav Thackeray has sent a few MLAs to go and speak to Eknath Shinde in Surat.

“Eknath Shinde a Sena loyalist; our MLAs will return soon”

“Our majority (numbers) has gone down a little, it is a matter of concern”

NCP leader Sharad Pawar has said that such a crisis is not unusual in Maharashtra. He added that his experience says that the government is likely to remain in power, despite defection by Shinde’s faction.

Meanwhile, the state BJP has said that it has no role to play in the rebellion. However, Maharashtra’s BJP chief ChandrakantPatil also said if the BJP receives any proposal from Eknath Shinde to form the government, they would “definitely consider it”.

Whoever Congress embraces- it becomes a hug of death for that ally!

Maharashtra Congress minister on Tuesday claimed there was unrest in the Sena since last week. Mr. Shinde, who holds the department of urban development, wants to become the deputy chief minister, the Congress minister told. However, state NCP minister Chhagan Bhujbal said he does not feel that there is a threat to the Maharashtra Maha Vikas Aghadi (MVA) government, comprising the Shiv Sena, NCP, and Congress.

A meeting has been scheduled to enquire about Eknath Shinde at CM Uddhav Thackeray’s residence. A meeting has also been called by the state Congress. Meanwhile, a recent tweet by Mr. Shinde states that he is Balasaheb’s ‘Shivsainik’ who has taught him about Hindutva. he added that he has not lusted for power, and will never do so.

Shiv Sena ended its decades-long alliance with the BJP and formed the government with these secular parties in 2019. The BJP had miserably failed to form a government with a faction of NCP leaders earlier. As the crisis unfolds with Sena MLAs in fray this time, only time will tell what political future lies ahead for the state and its people.