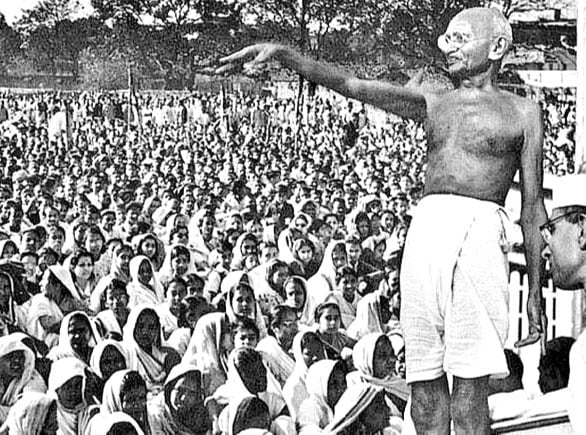 “Here is a mantra, a short one that I give you. You may imprint it on your hearts and let every breath of yours give expression to it. The mantra is: ‘do or die’. We shall either free India or die in the attempt; we shall not live to see the perpetuation of our slavery,” declared #MahatmaGandhi on 8th August 1942 at Gawalia Tank Maidan, during the Bombay session of #AllIndiaCongress. This was one of the final pushes the country needed to unite against the British and demand for India’s freedom. The Congress also passed a resolution for a civil disobedience movement unless the British completely transferred governance to Indians.

Today as we celebrate the 78th anniversary of the start of the famous revolution #QuitIndiaMovement, let us look back at what caused this revolution, its consequences and all the opposition faced by it.

As we are all well aware, #WorldWar II broke out inn 1935 and then British Governor General of India, Lord Linlithgow wanted Indian soldiers to fight for the British in the war. Indians demanded they would fight in the war only if they were promised complete independence. To negotiate with the leaders, British government sent a mission called Cripps Mission to India. The negotiations failed as the mission did not agree to grant immediate self-rule to India. Post this failure, Gandhi gave a call for #QuitIndiaMovement.

Soon after Gandhi’s inspiring speech, most of the Congress leaders including him, Jawaharlal Nehru, Sardar Vallabhbhai Patel and Abul Kalam Azad were arrested on sedition charges. The #INC was declared unlawful and the jailed leaders were denied a trial. Many homes and offices of Congress leaders were raided. What began as a peaceful movement later turned a little violent as young leader Aruna Asif Ali took charge of the Bombay session and hoisted the national flag at the same Maidan, in spite of stern British warnings. Protest marches and rallies were held countrywide as Gandhi called Indians to act as an independent nation and not follow British orders. Many laid down their lives in the movement as violence broke out at several places and the police lathi charged and fired at the protestors.

The movement also suffered from setbacks, the major one being not receiving enough or no support at all from the #MuslimLeague, #HinduMahasabha, #RashtriyaSwayamSevaksangh (RSS), #CommunistspartyofIndia (CPI), the princely states and from the international front as well. #BRAmbedkar also opposed the movement openly.

#BRAmbedkar, who was a member of the Viceroy’s executive Council during the time criticised the movement as “both irresponsible and insane, a bankruptcy of statesmanship and a measure to retrieve the Congress prestige that had gone down since the war started. It would be madness, to weaken law and order at a time when the barbarians were at the gates.” By barbarians, he meant the Nazis, the fascist Italy and Japan who were worse than the British. He also said that patriotic duty of Indians was to prevent anarchy and chaos in the country via such movements which would facilitate the subjugation of India by Japan.

One of the major reasons for the failure of the Quit India Movement was the lack of proper leadership at the top to steer the movement in the right direction. While not being united was one of the reasons why we faced a foreign invasion, it didn’t end there and continued through the freedom struggle too. Mahatma Gandhi had hoped that as the British would be more bothered and busier with the war situation and might grant freedom to India if the whole country united and revolted against them, unfortunately that did not happen. Had any one of these leaders, either Jinnah or Savarkar had sided with the movement and extended their support, it maybe could have gained more momentum. There were some rebellion within the INC itself as some of their members dint support the movement. The leaders also lacked a proper plan, structure and a clear goal and especially with the imprisonment of major leaders, the cause was half lost. However, the movement definitely was a milestone in driving British out of India.