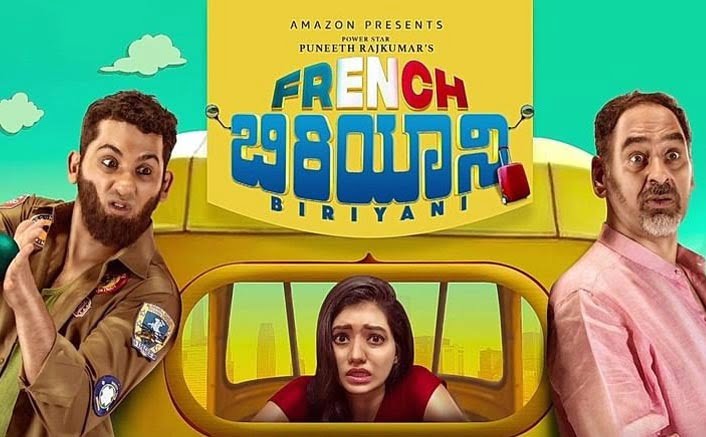 French Biryani is a celebration of Bangalore cosmopolitism. It manages to portray an image of Bangalore’s true culture and multi-linguistic nature and showcases Bangalore as an amalgamation of characters. It tries to build a new genre of cinema in Kannada – one altered to cater to the OTT viewer but misses out on delivering to its expected standards.

Produced under the PRK banner which has delivered content-rich cinema, like Kavaludaari, Maayabazaar, and Law since its inception, French Biryani is an Amazon Prime exclusive. The movie had set high expectations, with its promising underdog star cast – who have built a following based on their humor rich online content, and a promising director Pannagabharana. The expectations weren’t catered to – making the movie feel underworked, and a drag.

The plot of the movie revolves around Asgar – an auto driver from Shivajinagar, and Simon (Sal Yusuf) a French Viagra salesman whose paths meet leading to a comedy of disasters and confusions. Simon, who is confused to be delivering an important package related to a deceased don gets entangled in a disastrous adventure involving a mob, the cops, the media, and a bag thief. Asgar, who gets off on a wrong foot with Simon initially grows empathetic towards the foreigner as the plot progresses and the madness they go through is what forms the French Biryani.

The performances are a treat to watch and lift the subpar script to a certain level. Danish Sait once again proves his talent as he embodies his famous radio voice of Asgar. Sal Yusuf manages to showcase the vulnerability of a lost French man in a beautiful way. Disha Madan promisingly plays a news-hungry journalist in her relatively small role that helps carry the story in pivotal areas. Rangayana Raghu as the cop, Sindhu Murthy as Asgar’s sister, Keerthana as Asgar’s mother and Nagabhushana as a frustrated brother-in-law deliver strong supporting roles. Mahantesh Hiremath overshadows the protagonist with his extraordinary performance as Muscle Mani.

French Biryani, like its name, is unique as it breaks barriers and conformities that have become a staple in mainstream cinema. It is probably for the first time an inter-religious marriage is used to converse about feminism rather than love jihad or religion in itself. The changes that need to be brought about in the societal behavior of our city, that we fail to talk about because of our conditioning is highlighted through a necessary exaggeration.

The story however falls flat due to a weak script. The movie at places tries too hard to be funny, making it feel like a drag. Over usage of sexual innuendos and sexual undertones to every punch line make the comedy predictable, boring, and not hard-hitting. PJs and Whatsapp jokes that are no longer funny are used in scenes that had high potential in making the movie successful. Attempts at tackling issues such as racism and communalism with humor go in vain due to poor writing. The direction department has underperformed as well. Sudden cuts and untied subplots hinder the flow of the movie and force the audience to disconnect with the narration.

French Biryani in short is a brave experimental attempt in Kannada cinema, which failed to live up to the expectations it had but created a new subgenre for filmmakers to attempt.

NewsHamster movie meter that ranges from “Watch this movie right now!” to “Don’t waste your internet on this” rates French Biryani as a “One time watch if you are bored.”