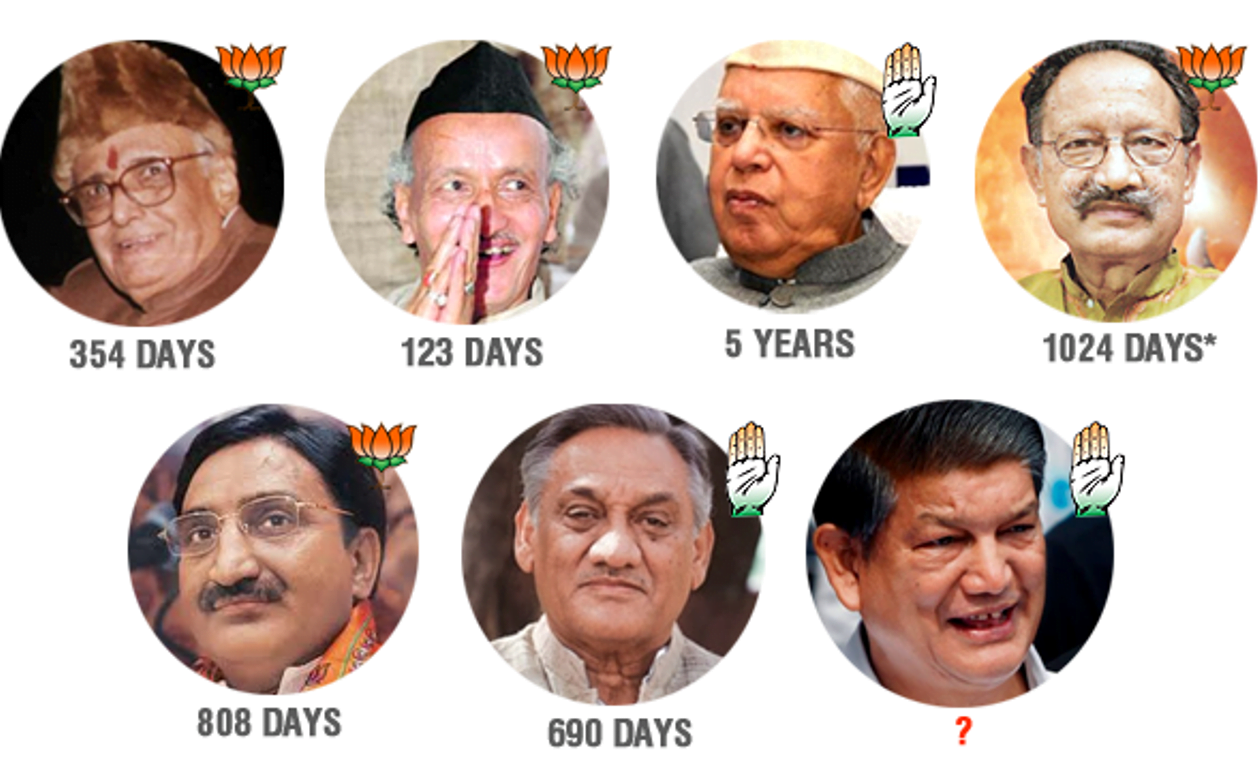 Uttarakhand known as Uttaranchal is a state in the Northern part of India. There are several Hindu temples and pilgrimage centers throughout the state and because of that it is referred to as “Devabhumi” (Land of the Gods). Uttarakhand was created on 9th November and became the 27th State of the Indian Union. The beautiful state of Uttarakhand saw many up’s and down’s over the years as many Chief Ministers have resigned from their post even before the completion of their term. Recently, the news of Trivendra Singh Rawat resigning from his post as a Chief Minister surfed. He was the 9th Chief Minister who left his post before the tenure completed.

The first Chief Minister of Uttarakhand was Nityanand Swami from 9th November 2000 to 29th October 2001 (354 days). At a public event at Kumaon, Swami acknowledged the credit for the development in Uttaranchal (now Uttarakhand) to the former Congress Chief Minister Narain Dutt Tiwari.

After this incident Swami’s own party men were furious with rage and they took the streets shouting anti slogans and burning effigies of Swami. His perfect integrity and the fact that he was modern for the likes of the founders of Bharatiya Janta Party Atal Bihari Vajpayee and Lal Krishna Advani stood him in a good place, even though denying the fact that the only administrative experience he had was running for the Uttar Pradesh Legislative Council. However, his party member asked him to resign from his post and appointed his cabinet colleague Bhagat Singh Koshyari. Before being the CM of Uttarakhand Nityanand Swami was the chairman of UP Legislative Council in 1992 and he remained on that post till 2000.

The second Chief Minister was Bhagat Singh Koshyari. He was the President of BJP of his state and after the defeat of his party in the year 2002 in Assembly election; he resigned from his post as a Chief Minister on 1st March 2002.He is now the Governor of Maharashtra and Goa.

The third Chief Minister was from Indian National Congress Party Narayan Dutt Tiwari. He had been the Chief Minister of the undivided Uttar Pradesh thrice (1976-77, 1984-85, 1988-89) and was confirmed to take the oath and lead the government in Uttarakhand (2002-2007). Tiwari served a full term but faced a lot of challenge from various factions in the organization all the way through his tenure. He was formerly in Praja Socialist Party and later joined the Indian National Congress Party.

In 2007 BJP again came to power Maj Gen B C Khanduri, who had been the Minister in Prime Minister Atal Bihari Vajpayee’s Cabinet was affirmed as a Chief Minister (7th March 2007- 26th June 2009). Nevertheless, he couldn’t endure in the chair for more than 2 years. In the year 2009 the party replaced him.

The fifth Chief Minister was Ramesh Pokhriyal He is known by Nishank became the Chief Minister of Uttarakhand on 27th June 2009- 10th September 2011). The BJP Party removed him from the post because of they wanted a change in leadership in view of the upcoming election. There has also been an allegation of corruption against him but the then party president Nitin Gadkari underlined the only reason for replacement was for the election and that the party wants to make it clear that the charges against him are not true. He was later appointed to serve as Ministry of Human Resource Development on 31st May 2019 and as of July 2020 the Ministry’s name change; his title was changed to Ministry of Education.

The sixth Chief Minister was again Bhuwan Chandra Khanduri who was with the Indian National Congress. BJP won 31 seats while on the other hand Congress won 32 seats and formed their government with the support from the BSP. During his tenure his main focus was on social issues like free education to students but he was heavily criticized by the industries who termed him as the one who is opposed to development.

The seventh Chief Minister was Congress leader Vijay Bahuguna (now in BJP) and was appointed for the post on March. His tenure was from 13th March 2012- 31st January 2014. He resigned from his post as a consequence of the devastating Kedarnath floods of 2013.

The eighth Chief Minister was Harish Rawat. His tenure was from 1st February 2014- 27th March 2016, after which he resigned from his position when nine congress MLAs including Vijay Bahuguna rebelled against Rawat’s leadership. Harish Rawat manages to return to power 21st April- 22nd April2016, 11th May 2016- 18th March 2017. In the Assembly election in 2017, Congress lost to 11 seats while BJP rode the Narendra Modi wave winning 57 seats in the Assembly.

After BJP came into power they appointed Trivendra Singh Rawat (18th March 2017- 9th March 2021) as the ninth Chief Minister. However, a few days before he was to complete four years on 18th March he resigned from his position. The reason behind his exit was the growing discontent among MLAs and factional leaders in the state unit. According to the party sources the decreasing popularity of Rawat has encouraged rivals in the party to drive the leadership of Rawat to change before the election. They were upset with the slow progress in the developmental projects and the limitation in governance aspect, the factionalism intensified. The situation became worst that no one could recover his image.

Now, it is about time to see if the history repeats itself or this time will be different.