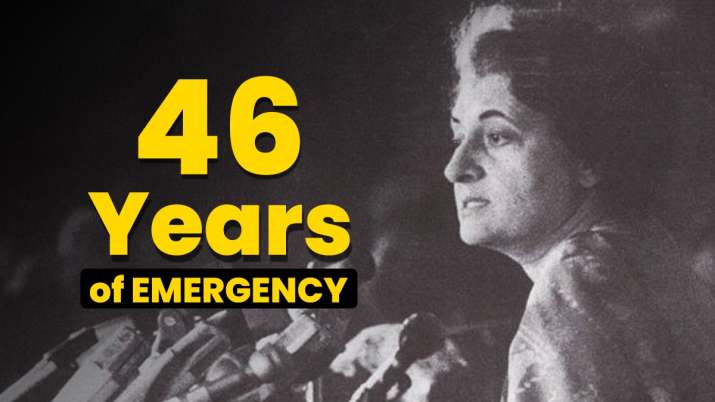 On the late-night of June 25, 1975, President Fakhruddin Ali Ahmed signed the order for emergency on the advice of the then PM Indira Gandhi. The period that followed, until the general elections of 1977 is often marked as the “dark phase” of Indian politics. It was characterized by the withdrawal of fundamental rights, suspension of civil liberties, and arrest of popular opposition leaders.

Emergency in the Indian Constitution

The President can declare a national emergency under Article 352 of the constitution on the grounds of internal disturbance (changed to armed rebellion), war, and external aggression. During an emergency, the state becomes highly centralized and the basic rights of citizens are suspended. Although Indira Gandhi was regarded as a ‘hero’ after India’s victory over Pakistan in the 1971 war, she faced a lot of challenges internally. There was a food crisis in the nation, coupled with unemployment and runaway inflation.

#NeverForget Today was the day, June 25, 1975, when Indira Gandhi declared the #Emergency, and THIS is how it happened.

Besides, she had to face the wrath of student protests led by Gandhian leader Jay Prakash Narayan, who led a movement against corruption and misrule of the Congress-led government in Bihar.

In another development, Gandhi’s win in the 1971 Rae Bareli parliamentary elections was contested. Socialist leader Raj Narain, who had fought against her, filed a petition in the Allahabad High Court, accusing Gandhi of having won the election through corrupt practices and misuse of the government machinery.

Meanwhile, JP Narayan called for a nationwide satyagraha to remove the Prime Minister. Many people from her party also called on her to resign. The government, however, responded by declaring a state of emergency. In her radio address, Indira Gandhi said that the Emergency was imposed to curb “internal disturbance”.

Consequences of The Emergency

The 42nd Amendment to the Constitution was also passed during this period, which contained provisions that shielded certain parliamentary laws from judicial review.

The Emergency lasted for 21 months. In January 1977, the government stated that it would soon hold elections. The Janata Party won the elections as congress suffered a crushing defeat as PM Indira Gandhi was booted out.

India saw the first non-Congress government at the centre. The Janata Party enacted the 44th constitutional amendment that nullified many provisions of the 42nd amendment; which prohibited suspension of articles 20 (Prohibition of wrongful conviction) and 21 (right to life and liberty) during an emergency.

As we recall the dark day that sought to challenge Indian democracy, knowing about the emergency is important for the nation’s youth.