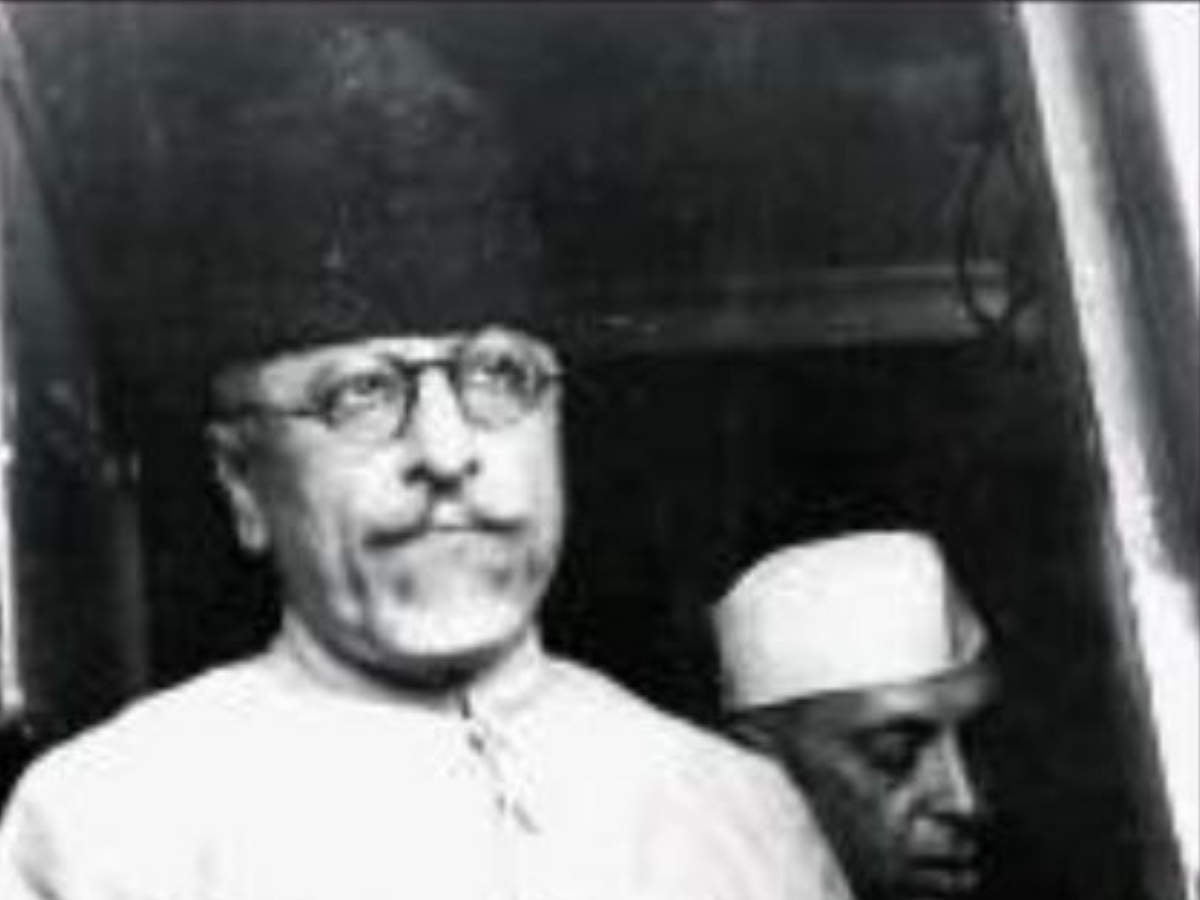 Image Source: The Times of India

Maulana Abul Kalam Ghulam Muhiyuddin Ahmed bin Khairuddin Al-Hussaini Azad or simply known as Maulana Azad is one of the most revered figures when it came to the Indian freedom struggle. Maulana Azad was born on 11th November 1888 in the city of Mecca. At that time, the city was under the control of the Ottoman Empire. Today Mecca is in Saudi Arabia. Maulana Azad was an Indian freedom fighter, Islamic Theologist, a writer and a senior leader of the Congress. The name Maulana Azad; was derived from an honorific title (Maulana that means ‘Our Master’), and his pen name (Azad, which means free). His birth anniversary is celebrated as National Education Day to recognize his contributions to the field of education.

His real name was Sayyid Ghulam Muhiyuddin Ahmed bin Khairuddin Al Hussaini who was eventually known as Maulana Abdul Kalam Azad. He and his family permanently shifted to Calcutta in the year 1890. Being from a family of scholars, he was homeschooled and was taught many languages. He had fluency in Arabic, Urdu, Bengali, Hindustani, Persian and English. The tutors hired by his family taught him many subjects such as science, mathematics, world history and philosophy.   In addition, he was even trained in the Madhhab (the Islamic School of Thought) of Hanafi, Maliki, and Shafi’i and Hanbali fiqh, Shariat. Azad was a precocious student who ran a library, a reading room and debated before he was twelve. By the age of fourteen, he was contributing learned articles to the magazine called Makhzan. Additionally, he taught to students that were twice his age.

When he took a trip to Egypt, Syria, Turkey and France in 1908, he met several revolutionaries such as the followers of Mustafa Kemal Pasha, members of the Young Turk Movement and even Iranian revolutionaries. Due to this influence, Azad became a fierce critic of the British and even Muslim leaders. His opinions were considered radical for his time. He criticized the British for their racial discrimination and for not providing for the Indian needs. Additionally, he criticized the Muslim leaders for focusing on communal issues rather than other pressing issues. However, his views changed once he met ethically-oriented Sunni revolutionaries from Iraq. He was greatly influenced by their Arab nationalism and anti-imperialism stance. Before his trip to the Middle East and Europe, Azad had opposed the partition of Bengal. This opposition was against the common opinion of the Muslims during this period. Moreover, he was active in revolutionary activities that were introduced by Aurobindo Ghosh and Shyam Sundar Chakravarty. Azad quickly gained the trust and praise from other revolutionaries when he secretly helped them organize revolutionary activities and meetings in Bengal, Bihar and Bombay.

In 1912, Azad established an Urdu weekly magazine called Al-Hilal from Calcutta. In the magazine, he openly attacked the British policies while showing the challenges faced by the citizens. Through his magazine, he promoted Hindu-Muslim unity while encouraging Muslim youths to fight for the freedom of India. However, due to World War 1, the British had imposed strict censorship under the Press Act. Due to the Press Act, his magazine was banned in 1914. Azad was a key supporter and contributor of the Khilafat Movement as the Ottoman ruler was the Caliph of the Muslims. Since the Sultan’s position was being threatened (as they sided against the British in WW1), it caused great distress among the conservative Muslims. Azad saw this as an opportunity to energize the Indian Muslims and to achieve political and social reforms through this movement. Azad started a new journal called Al-Balagh that was subsequently banned in 1916. In addition to the ban, Azad was arrested under the Defence of India Regulation Act. During this period, the various presidencies such as Delhi, Bombay, United Provinces and Punjab had prohibited his entry. He was transferred to Ranchi prison, where he was incarcerated till 1st January 1920.

Upon release, Azad returned to the Indian freedom struggle with new vigour. A year before his emancipation, the British had massacred tens of thousands of innocent civilians in Jallianwala Bagh. Additionally, the British had imposed Rowlett Acts in 1919. Both of these events had angered the Indian public greatly. During the same period, Mahatma Gandhi had taken over the leadership of the Congress. Under his leadership, Congress reached out to the Khilafat Movement in its support. Azad and the Ali Brothers had welcomed this support and both the groups began on the Non-Cooperation movement. In 1920, along with three others, Azad had led to the establishment of Jamia Milia Islamia University in Aligarh without the help of the British. In 1934 he helped to shift the campus to New Delhi.

In the year 1922, the Non-Cooperation Movement and the Khilafat movement had suffered massive blows. The Non-Cooperation Movement was weakened due to the Chauri Chaura incident (22 policemen were burned alive by an angry mob). The Khilafat movement suffered because Mustafa Kemal Pasha had taken over Turkey by deposing the Sultan. Moreover, many Congress leaders were imprisoned that left the movement leaderless.

In 1924, Azad was the youngest man to be elected as the president of Congress. As the Congress president, Azad worked extensively to promote education, Gandhi’s vision and bring in social reform. Furthermore, Azad had vehemently criticized Mohammad Ali Jinnah over the Two-Nation Theory. He lambasted Jinnah and the Muslim league over the Hindu-Muslim divide that Jinnah had brought through his Two Nation Policy. Furthermore, Azad had encouraged all Muslims to preserve a Muslim India. In August 1942, Azad had demanded the British to “Quit India”. He travelled extensively to meet all provincial leaders, grassroots activists, gave speeches and planned rebellions. On 7th August (a day before the launch of the Quit India Movement), Azad gave a vociferous speech to the Indian public at Gowallia Tank. Two days later, the British arrested Azad and the entire Congress leadership.

By the end of World War Two, the British had agreed to transfer the power to the Indians. When all the political prisoners were released by 1946, Azad led the Congress for a fresh election in the Constitute Assembly of India. Azad had further attacked Jinnah over his demand for Pakistan and his Direct Day agitation. The agitation had caused severe communal violence across India, causing Azad to travel across Bengal and Bihar to calm the tensions and promote Hindu-Muslim unity.

When India and Pakistan became independent, it had sparked a humanitarian crisis due to the violence caused by the partition of both countries. Azad had taken up the responsibility of the Muslims living in India by organizing refugee camps, supply lines, security and calming the tensions in the riot-affected areas. In a few years, Maulana Azad had been elected to the Lok Sabha from Rampur District in 1952 and 1957. Azad had supported Nehru in his socialist policies, economic and industrial policies. He even advocated for the advancement of women rights in the field of social rights and economic opportunities. Furthermore, Azad stressed the same for the underprivileged Indians. In 1956, he served as the president of the UNESCO General Conference held in New Delhi.

As the first Education Minister, he had emphasized educating the rural poor and the rural girls of the country. Furthermore, as the Chairman of the Central Advisory Board of Education, he actively supported adult literacy. In addition to adult literacy, he supported universal primary education that was free and compulsory for all children up to fourteen years of age. Additionally, he was vocal about the diversification of secondary education, emphasizing vocational training and girl education.

Maulana Azad is one of the many gems that this country has produced. His contributions to the freedom struggle and in the field of education are noteworthy. Azad was very vocal when it came to promoting Hindu-Muslim unity. Additionally, when the majority of the Muslim leaders were supporting Jinnah for the partition of the country, he did not back down. His contributions shall forever be remembered while rightly crediting him to promoting education among the Indians. National Education Day commemorates his achievements in education.

Roaring From Beyond The Grave- Tipu Sultan And His Tumultuous Legacy