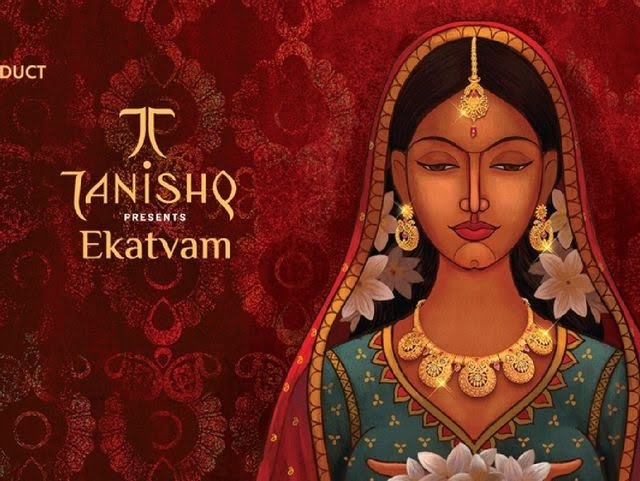 Followed by a strong wave of public outcry, Jewellery brand – ‘#Tanishq’ removed its Advertisement based on the ‘#Ekatvam’ jewellery line campaign on 27th October, 2020. The prestigious brand was set aback as it witnessed vicious trolls and criticisms on different social media platforms. According to a statement released by Tanishq, “The idea behind the Ekatvam campaign is to celebrate the coming together of people from different walks of life, local communities and families during these challenging times and celebrate the beauty of oneness”.

The trending #BoycottTanishq movement divided public into two polarised camps. While the conservationists interpreted the advertisement as a ‘Love Jihad’ campaign, a significant section of people applauded the brand’s creative ‘secular’ approach. The 45-seconds advertisement depicts inter-faith marriage as the Muslim mother-in-law celebrates a traditional South-Indian baby shower of her pregnant daughter-in-law. Popular Indian faces have joined either of the two camps and contributed in the ‘Twitter debate’. The Bollywood Actress, #KanganaRanaut has sharply remarked that the advertisement not only propagates ‘Love Jihad’ but also promotes ‘sexism’, thus announcing a need to ‘Save our civilisation’.

However, the Congress MP of Thiruvananthapuram boldly shared a tweet on 13th October, 2020 highlighting the brand’s initiative to promote Hindi-Muslim ‘ekatvam’ and questioning the contemporary state of ‘Secularism’ in India.

We must also note that there is a long list of controversial advertisements reportedly ‘hurting’ religious sentiments in India. One of them is the 2016 Advertisement by Baba Ramdev’s ‘Patanjali’, sparking protest among the Christians in Bhopal. It was a 17 seconds clip warning about the dangers of foreign goods and highlighting the need to participate in the age-old Swadeshi Movement. To which a group of Christians felt that it directly offended their community.

In 2017, an Australian advertisement featuring Lord Ganesh feasting on lamb meat provoked religious conflicts, as several Hindu groups lodged complaints against it. In its defence, the Advertising Standards Bureau (ASB) stated that it depicts a “clearly fictional and humorous scene”, celebrating religious diversity and thus “not promoting any act of discrimination, prejudice or vilification”. Another similar advertisement in Spain depicted the Hindu goddess- Lakshmi as sitting on top of a ham burger’. It was posted by the ‘Burger King’ with the title- ‘a snack that is sacred’. In its response, the Hindu groups not only expressed their displeasure but also clarified that most Hindus are vegetarians. In order to save the thread, the company immediately pulled off its controversial advertisement.

As Yolanda Hadid rightly puts that, “Religion is a very sensitive subject and reason for wars all over the world”. India is a home to multiple groups of people belonging to different religions, communities, caste and class. Given the historical tale of partition, Indian population is significantly sensitive to ‘religion’. This attitude often leads to questions on the constitutional idea of ‘secularism’. Another popular instance of religious controversy was Jawed Habib’s 2017 advertisement featuring Gods selling the parlour services. Primarily meant to suite the festive season, the salon brand received many criticisms and Habib had to issue an apology as well.

Knowledge of consumer attitude is very pertinent for a successful advertising campaign. Any form of difference or diversion is often seen as transgressed and violation of cultural norms and beliefs. Ironically, in a ‘secular’ country like India, the word ‘religion’ naturally accompanies culture, language and history. This feature of a diverse and large consumer base has always attracted many multinational corporations and brands to establish in India. Therefore, it is very important for advertisers to consider the socio-political factors influencing the attitude of consumers towards advertising. ‘Infotainment’ might be the primary goal of advertisements, but success is ensured only given the contextual fulfilment.

A TIMELINE OF THE RAPE CASE AGAINST CHINMAYANAND