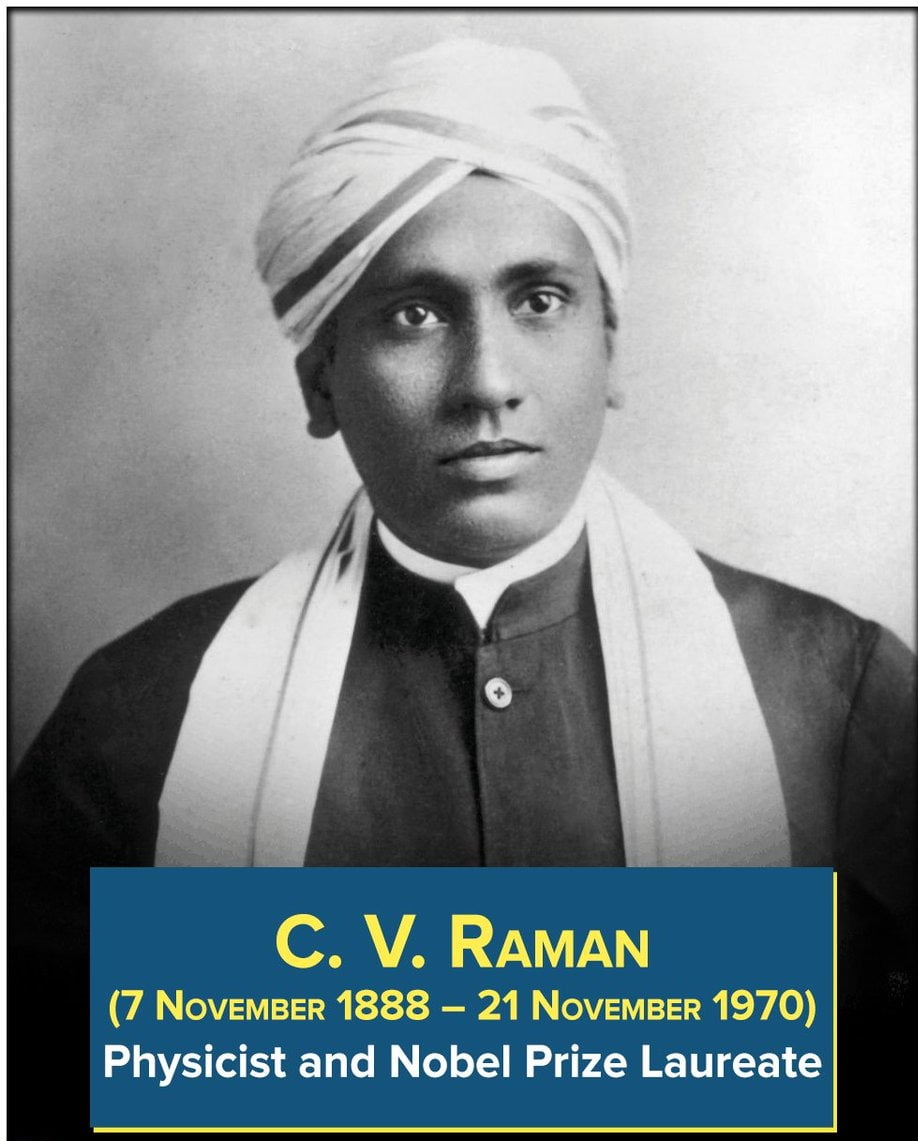 Born in 1888, #ChandrasekharaVenkataRaman was an accomplished Indian #physicist, who made path-breaking contributions in the field of ‘#Light scattering’. Along with his brilliant student, K.S. Krishnan, he discovered that when light traverses a transparent surface, some of the deflected light change its wavelength and amplitude. This discovery led to a major breakthrough and came to be known as the ‘#RamanEffect’ or ‘#RamanScattering’.

On his #132nd birth anniversary, let us look into few significant facts about his life and success:

1. Born to Hindu Tamil Brahmin parents, C.V Raman was a #precocious child, completing his secondary and higher secondary education from St Aloysius’ Anglo-Indian High School at the ages of 11 and 13, respectively. At the age of only #16, he topped bachelor’s degree examination at the #UniversityofMadras with honours in #physics from #PresidencyCollege. His first research paper, on diffraction of light, was published in 1906 while still a graduate student. The next year he obtained an M.A. degree. Gifted Raman joined the #Indian Finance Service in Kolkata as Assistant Accountant General at a mere age of #19.

2. Despite having achieved a government service job in the Finance Department of Colonial government, CV Raman quit the job after being appointed as the first #Palit Professor of Physics at the #UniversityofCalcutta in 1917. While teaching at University of Calcutta, he was simultaneously conducting research at the Indian Association for the Cultivation of Science (#IACS) in Calcutta.

3. On his first trip to Europe, seeing the #MediterraneanSea motivated him to correctly describe the reason for the blue colour of the sea as a phenomenon of diffraction. After having founded the #IndianJournalofPhysics in 1926, Raman and #Krishnan discovered on 28 February 1928 about the “modified scattering” of light, or more popularly known as the Raman effect.

4. Every year, #28February is celebrated by the Government of India as the #NationalScienceDay.

5. Raman won the #KnightBachelor award a year later and became a #Fellow of the Royal Society thereafter. In 1932, he along with #Suri Bhagavantam discovered #quantum photon spin, further confirming light’s quantum nature. Raman was also the first person to study the harmonic nature of #Mridangam and #Tabla, as he was interested in musical instruments’ acoustics.

6. C.V. Raman won the #1930NobelPrize in Physics and was the first #Asian to receive a Nobel Prize in the field of Science. Meanwhile, he also became the first #Indian Director of the #IndianInstituteofScience in Bangalore.

8. In 1954, the Government of India honoured him with the first #BharatRatna, the highest civilian award.

9. In 1957, Raman went on to receive the #LeninPeacePrize. In 1998, the Indian Association for the Cultivation of Science and American Chemical Society recognized his discovery as International Historic Chemical Landmark.

10. On his first death anniversary, the #IndianPostalService published a commemorative stamp of Sir C.V Raman with the reading of his spectroscopy and a diamond in the background.