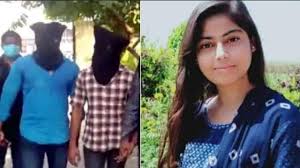 On the 28th of October, a young B.Com student was killed at gun point. The deceased is identified as Nikita Tomar who was shot dead outside her college while was she returning from an exam. The incident took place in Faridabad district of Haryana, outside Aggarwal college where the victim studied B.com.

The offenders are identified as Tausif and Rehan both in their early twenties, Tausif is also identified as the schoolmate of the victim. After the incident, Nikita was rushed to a nearby hospital. However she succumbed to her injuries. Naveen, the victim’s brother filed a case against Tausif and Rehan and the family also expressed that Tausif had been stalking and harassing Nikita for years now.

Tausif and Rehan were captured arriving at the spot of the incident by a CCTV. According to the footage, it was observed that Tausif asked Nikita to come inside the car he and Rehan arrived in. As she refused to do so, she was shot on the spot.

The offenders then drove off leaving her to die outside her college. She was however rushed to a private hospital but could not be saved. Later in the evening, Tausif as well as Rehan were arrested. Following the arrest, the two were sent into police remand.

Tausif is said to be angered at the fact that the victim refused to pick his calls for a few days prior to the incident. He was also furious at the fact that no other communication was possible as she had blocked his number.

It has come to light that he had kidnapped her back in 2018 and the complaint was registered by her father, Mool Chand Tomar. However, the complaint was withdrawn. The family, responding to the incident has expressed that Tausif had been forcing her to convert to Islam and to forego her Hindu religion. The family has also identified this incident as a case of “love jihad”.

Further responding on the incident, the victim’s father has also expressed that she was interested to join the army and was making all preparations necessary. “She wanted to join the Army and we were making every effort to support her dreams. She had recently taken the Air Force Common Admission Test and had started preparing for the National Defense Academy exam, and was planning to focus on this once she was done with her college exams. She had just written her last exam when this incident happened,” he said.

Tausif and Nikita met each other while they were pursuing Class XII and he is said to have had developed one-sided feelings towards her. It was recollected that he had kidnapped her back in 2018 in order to pressurize her to marry him. With regards to this, Mool Chand has expressed that “He had kidnapped her in 2018 on the pretext of dropping her home. She was leaving college with two-three friends, and he offered them a lift. Since my daughter knew him as they were in the same class in school, they agreed. However, when her friends got off at Sector 55, Tauseef took her to his home, locked the door and started trying to pressure her to marry him”.

Since she was returned back to her house by evening, Mool Chand had decided to withdraw the complaint as he didn’t wish for further investigation. He continued to explain that, “We had lodged an FIR but Tauseef’s relatives begged us to drop the case. They reassured us this would not happen again… We also thought our daughter was safe and we wanted to protect her name, so we dropped the matter. In the two years since, he had stopped harassing her… But in the last few days, he once again started pressuring her to marry him, asking her to convert to Islam so they could get married, but she was not willing. This is what happened on Monday as well. Tauseef asked her to go with him. When she refused, he tried to abduct her and shot her when she resisted.”

Reacting to the incident Naveen, her brother has exclaimed that he wants them to be punished. “We want him to be hanged, nothing less will do,” he said.

However, Tausif has confessed his crimes but has filed an application to transfer him to another jail as he fears for his life at the district level jail. The Special Investigation Team (SIT) has also identified this as a case of “love jihad”, based on the statements by the victim’s parents.

Tausif has expressed that his career and dream of studying medicine was destroyed by the family as they filed a complaint against him with regards to the 2018 kidnapping. “I couldn’t study medicine because I was arrested. And hence I took revenge,” he said.

In recent developments, while both the accused were represented at court on Thursday, they have been sent to 14 day judicial custody.