Russia has started a war in Europe that has not been seen in decades and did not expect stiff resistance from the Ukrainians. While the entire Russian parliament voted to go to war, there was another supporter whom you would not expect, a man from Bihar!

Meet Abhay Kumar Singh, a deputat from Kursk, a western Russian city, who holds a position similar to that of an MLA. Mr Singh belongs to the ruling party, Yedinaya Rossiya (United Russia). Dmitry Medvedev, a former Russian president, is the party’s leader.

Mr Singh was born in Patna, Bihar and went to Russia to study medicine in 1991. Once he completed his studies, he came back to India to practice as a doctor but could not find it lucrative enough. He soon went back to Russia and established a successful pharmaceutical company. He joined the United Russia party in 2015 and won the provincial election in Kursk, in western Russia, in 2018. 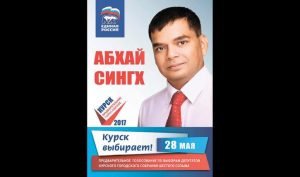 He has been a vocal support of Putin and his ongoing war against Ukraine. During an interview, he stated that Putin made pinpoint policies on every front, including the war against Ukraine. He went on to say that working as a spy for the KGB before entering politics aided Putin greatly in maintaining his position and power.

Mr Singh is currently residing in Kursk, which is only 40 km away from the closest Ukrainian border. He states that the Russian defence system is well-placed inside the country and the Russian military has installed anti-missile and radar systems. These systems have been installed everywhere to deter and minimise the threats of missiles launched by Ukraine or any other country.

Mr Singh told reporters that the economic sanctions imposed by the US or any other western countries would not affect the economy and the special military operations against Ukraine. He further refutes the claim that the people have been panicking to take out cash from the banks.