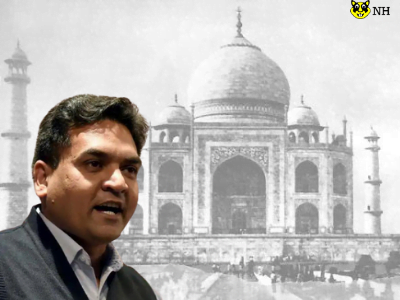 This is an old story, but somehow makes it to the limelight once in a while. Now its Kapil Mishra’s turn to carry the burden…

Kapil Mishra? The same politician from Delhi who wasn’t in news for anything since the longest of the time has now claimed that Taj Mahal is not a tomb or a mausoleum but a Shiva Temple that was taken over by the ‘Mughal’ emperor, Shah Jahan and was constructed according to his whims and fancies.

This is not the first time that Taj Mahal was called out for its superficial existence, previously leaders like Vinay Katiar and late Anant Kumar also claimed the same. But the pioneer of this argument or theory was a historian named PN Oak.

PN Oak or Purushottam Nagesh Oak was a historian who called himself a Hindutva historical revisionist and ran the ‘institute of rewriting Indian history’ in 1980s. He put forth this claim and also filed a petition in the Supreme court in 2000 to declare Taj Mahal a Shiva Temple and also claimed that Mumtaz was not even buried here. He sought permissions to break open the cenotaphs and reach the basement to prove his case. But the case was dismissed. He gave some evidences that were built upon later, some of which were as follows:

But all of these evidences are just speculative or superficial and have no strong scientific backing.

Another similar petition was filed by a group of lawyers in the Agra court in 2015 claiming entry of Hindu devotees to perform worship inside the premises and locked rooms to be opened. They made Lord Agreshwar Mahadev as the main plaintiff claiming ownership to his property. Now a proper response from the ‘other side’ was sought. The other side turned out to be the Archeological survey of India, who presented an affidavit to the Agra court in 2017. The affidavit said the following:

Later, the Central Information Commission, wrote to the Ministry of Culture seeking clarification for the same and the Ministry has clarified that there is no evidence of Tejo Mahalaya.

It is very strange to note that religious politics is now being played on monuments which showcase the beauty of Indian culture and heritage; this makes me ask a few questions. How jobless are we to get played by these claims? How does a monument’s religious orientation affect the country’s progress? How does any religion become dominant by having ‘monuments’ under its ambit?