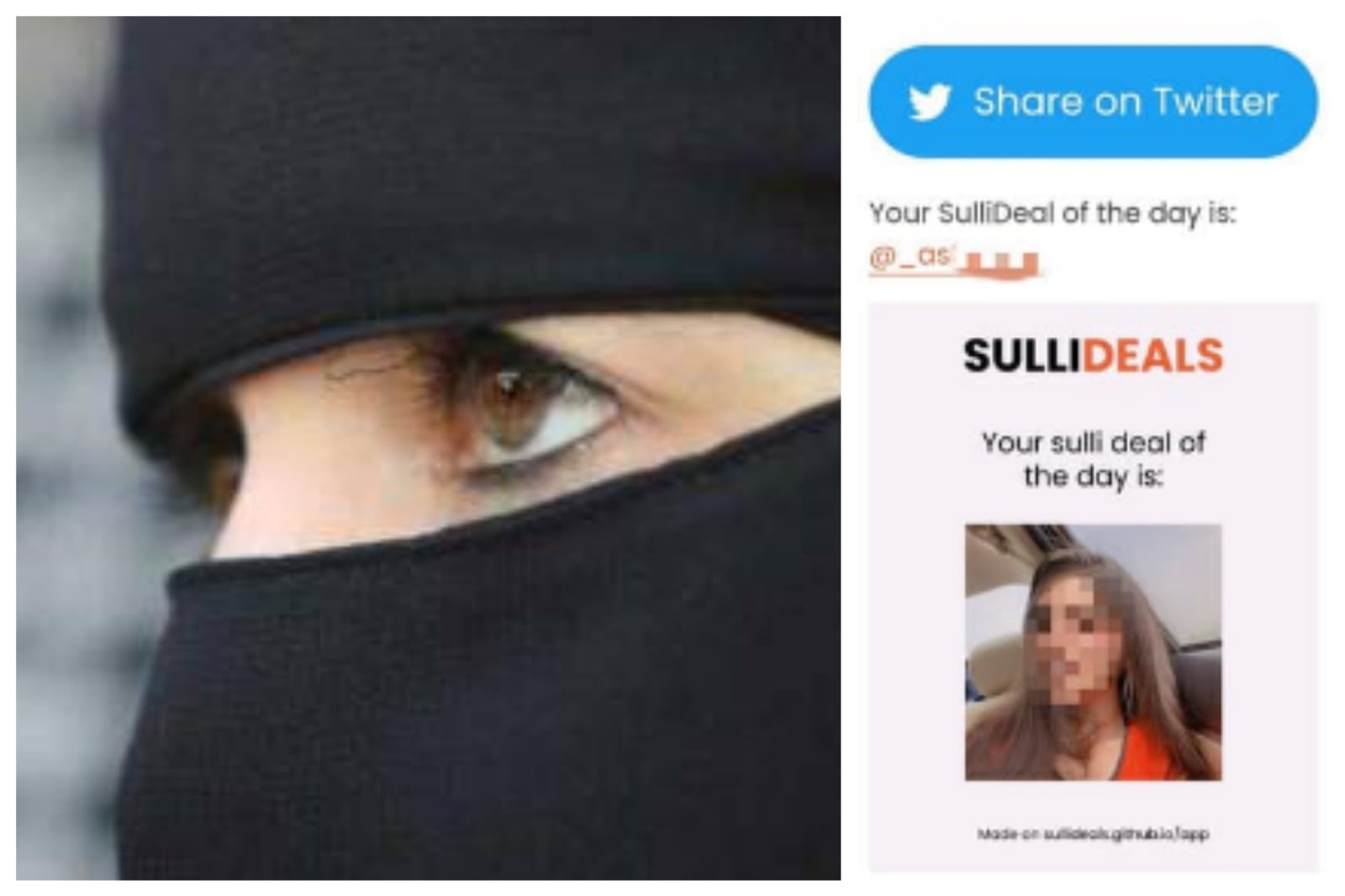 An app that puts ‘Muslim women on sale’. Absurd? But, that is certainly what has happened recently when an app stole pictures of around 90 Muslim women and used it to auction them off. A now-defunct app called ‘Sulli Deals’ had put these Muslim women on sale, mostly Indians, seemingly in a bid to target and harass them. The app had a tagline that reads “Sulli deal of the day” and is put across photos of Muslim women. ‘Sulli’ is a derogatory slang used especially for Muslim women.

The app apparently described itself as a “community driven open source project”. It may be noted that among the 90 Muslim women (approx.) – who were up “for auction” on the app – there were not only common Muslim women, but the app also had pictures of Muslim women journalists, activists, analysts, artists and researchers. While a majority of the women were Indian, women of other nationalities, including Pakistan, were also named.

The creators of the app would illegally collect photos of Muslim women from their social media accounts and use them inappropriately on the app and encourage people to participate in their “auction”. The incident came to light on Sunday after a Twitter user named ‘K’ found the link of the app (Sulli Deals) floating on the internet and tweeted about it. She is among those who were named on the app.

According to the date of upload of pictures, it suggests that the app had been active for at least the past 20 days. As far as the owners of the app are concerned, they were not immediately known. However, software development platform GitHub, which hosted the app, took it down Monday.

“GitHub has longstanding policies against content and conduct involving harassment, discrimination, and inciting violence. We suspended user accounts following the investigation of reports of such activity, all of which violate our policies,” said a company spokesperson, reported The Print.

According to a notice issued by the Delhi Commission for Women (DCW) to the Delhi Police on Wednesday, photos of hundreds of Muslim women and girls were uploaded by an unidentified group on an app using a platform called Github on Sulli Deal on July 4. “Reportedly, Sulli is a derogatory term used to refer Muslim women,” read the notice.

“Acting on a complaint received on National Cybercrime Reporting Portal regarding Sulli Deals Mobile Application, an FIR under section 354-A (Assault or criminal force to woman with intent to outrage her modesty) of the Indian Penal Code has been registered by the Cyber Crime Unit and investigation has started,” a senior Delhi Police official told India Today TV adding that notices have been sent to GitHub to share relevant details about this case.

The DCW has sought a copy of the FIR registered in this case, details of accused identified and arrested in the matter, steps taken to identify and arrest the accused in case of non-arrest and detailed action taken report in the matter.

The National Commission for Women has also taken cognisance of the matter. The woman panel wrote in a tweet on Thursday, “@NCWIndia has taken cognizance of the matter. Chairperson @sharmarekha has written to @CPDelhi for investigation & filing of FIR in the matter. Action taken has to be informed to NCW within 10 days. Copy of the letter has also been sent to DCP Cyber Crime.”

The appalling incident comes days before Eid-al-Azha, expected to take place on July 21. Notably, in May 2021, at the time of Eid-al-Fitr, a similar controversy came to light when Indian social media accounts ‘auctioned’ women online based on their Eid pictures and passed vulgar and filthy comments against them. A YouTube channel ‘Liberal Doge’ streamed the pictures and passed extremely misogynistic comments on the same.

The victims included women from India and Pakistan. The YouTube description of the video in Hindi translates to, “Today, we will stalk women with our eyes filled with lust.” Several people took to social media to call out the incident. Some women even resorted to legal action and filed complaints against the YouTube channel with the police. Following this, some of the profiles, which posted the women’s pictures, took down the posts or locked their accounts.

Rafale Deal: Price Rise as Quick as The Jet Itself.