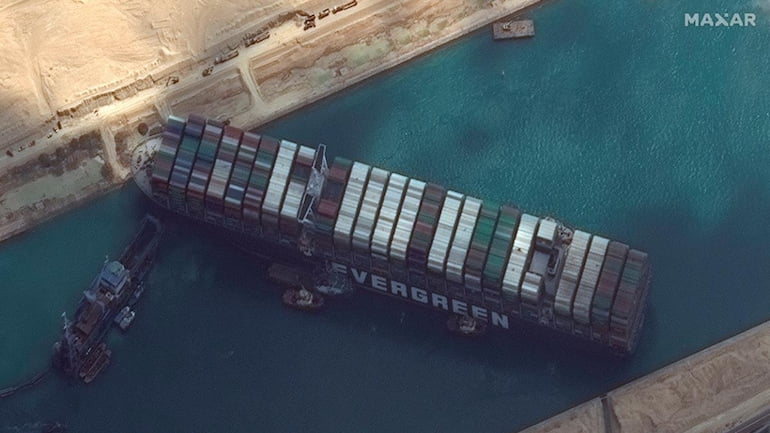 The blockage of Suez Canal is a serious issue which is directly affecting the global trade. Around 20 ships carrying livestock and other goods have been stuck due to the blockade.

The skyscraper-sized Ever Given, carrying cargo between Asia and Europe, ran aground Tuesday in the narrow, man-made canal dividing continental Africa from the Sinai Peninsula. Even helped by high tides, authorities have been unable to push the Panama-flagged container vessel aside, and they are looking for new ideas to free it.

Blockage of the Suez Canal is seriously hitting the global trade, the ministry of commerce and industry said in a statement.

Addressing this issue, Centre has chalked out a four-point plan to deal with the situation arising from the blockage of the Suez Canal including advising ships to re-route via Cape of Good Hope. This plan was chalked out in a meeting convened by the logistics division, department of commerce, government of India Friday. It includes prioritization of cargo, freight rates, advisory to ports and re-routing of ships.

It was noted in the meeting that over 200 vessels are waiting on the North and South sides of the Suez Canal and about 60 vessels are getting added to the queue on a daily basis, according to the statement.

“If two more days are taken before the efforts result in clearance of the canal (digging on both sides, extra barges being added on every high tide, tugboats, etc. to straighten the stuck vessel), the total backlog created would be about 350 vessels. It is estimated that this backlog should take about a week time to clear out. It was decided in the meeting to closely monitor the situation,” the statement read.

Under the prioritization of cargo, it was decided that FIEO, MPEDA and APEDA will jointly identify cargo particularly perishable cargo for priority movement and work with the shipping lines for the same.

The CSLA assured that the freight rates as per existing contracts will be honored.

“A request has been made to the shipping lines to maintain stability in freight rates during the period of this crisis. It was noted that the situation is temporary and is unlikely to have a long-lasting impact,” the statement read.

Once the blockage is over, it is expected that some bunching may take place, especially at the ports of JNPT, Mundra and Hazira, it said.

“Ministry of ports, shipping and waterways assured to issue an advisory to these ports so as to gear up arrangements and ensure efficient handling during the forthcoming busy period,” the statement said.

• The government is working the channels to ensure that Freight Rates remain the same as per existing contracts.

• The government has been making requests to the shipping lines to maintain stability in freight rates during the period of crisis.

• The government to explore the option of re-routing of ships via the Cape of Good Hope. It will decide on rerouting as, compared to the Suez, the cape route usually takes 15 additional days’ time.

Besides, shipping lines were advised through CSLA to explore the option of re-routing of ships via the Cape of Good Hope. It was pointed that such re-routing usually takes 15 additional days’ time.

Suez Canal is one of most important waterway trade route. Opened in 1869, the Suez Canal is a crucial link for oil, natural gas and cargo. It also remains one of Egypt’s top foreign currency earners. Immediate clearance of the blockade is required to continue the flow of trade. How quick the 4-point plan will work is awaited.

All You Need to Know about the Protest In Bangladesh