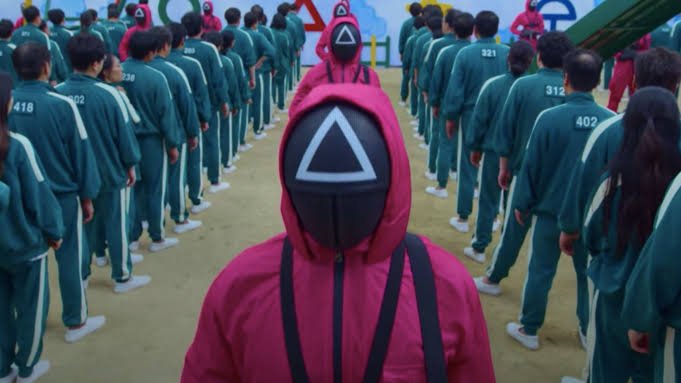 “Squid Game” is a recent netflix phenoma over which the entire world is going crazy. It has powered up a huge fan base within days of release. This is one of the most hyped up series of recent times, the last one that got hyped up at this level being “Money Heist”. It is possibly the first Asian series that has gained so much popularity worldwide.
“Squid Game” tells the story of 456 people indebted in various ways coming together to compete in a series of childhood games, which soon turns deadly. Written and directed by Hwang Dong-Hyuk, this is one of the most riveting and visually appealing series ever made, created in a sort of “Hunger Games” and “Panic” meets “The Game” kind of manner.
Of all the games played, It is only “Squid Game” that goes on for over nine heavy episodes and really focuses on the drama of the individuals, and on their active decision to compete. All characters are equal in the game, none too privileged. In the end, 455 of them will be dead and 1 will survive. This is the main premise of the series.

The main protagonist is Seong Gi-hun (Lee Jung-jae) a compulsive gambler has lost everything and is in dire need for money, as his mother needs an operation and his ex-wife is moving countries with his daughter. He has already signed away organs to moneylenders somewhere in his gambling addicted lifestyle. The first episode establishes his lifestory and the misery before introducing the gameshow mechanics of the series, and the remaining episodes compound it.
We soon meet the other characters, and though they are seemingly closed off and cold, the layers will get unraveled as the game intensifies. We get to hear the perfectly dramatized sob story of each character – both young and old – and connect with them. The series has a vibrant set of characters including ruthless strategists, unexpected heroes, deceitful introverts, and unhinged criminals, all played perfectly by their respective actors.

“Squid Game” has hit Netflix’s top spot in 90 countries, been subtitled in 31 languages, and dubbed into 13—a real global sensation. It’s part of a larger trend in which English-speaking audiences in particular are getting into translated content.
Netflix’s translation of the series fom Korean into English has sparked online controversy, with some Korean speakers arguing important meaning is lost in the dubbed and subtitled versions of the show.