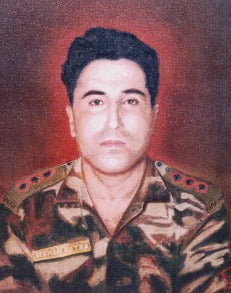 It has been 21 years since Captain Vikram Batra laid down his life for our country in Kargil. Born on 9th September 1974, he was one of the bravest soldiers the India has ever seen. Kargil was a difficult turf. Problems like narrow roads and better altitude served as a benefit to the enemies. Operation Vijay was thus launched to take control of Tiger Hills, where some of the peaks were captured by Pakistani soldiers. 24-year-old Captain Batra was one among the brave troops who took full control of the hills on 4th July 1999. The whole country was very happy about the success of Operation Vijay.

The opposite side called him “Sher Shah” (lion king) as they were well aware of his valour and bravery. The Captain’s troop were on a mission to capture Point 4875. This Point was an important peak in the Muskoh Valley. This peak dominated the National Highway 1 and it was very necessary for the Army to capture it. It was a very difficult mission. He had a high fever as he was still recovering from the wounds from the battle at Point 5140 on the day of mission but volunteered to lead. An officer from the Pakistani side warned him to not to come or he will have a tough time, but this brave heart feared nothing.

By the night of 6th July, the Pakistani soldiers had come so close to the Indian troops that the two sides engaged in a verbal abuse. After detecting enemy presence on a narrow bridge on Point 4875, Batra noticed that the opposite side was firing at trapped, Indian soldiers from a machine gun. Swiftly moving towards the gun, he threw a grenade at it and destroyed the gun. He then commanded the troops to the next position which was at a height of 16,087. It was snowing and the visibility was not so clear. By early morning next day, Indian soldiers had destroyed a couple more machine guns and had reached the top of the bridge.

Batra was instructed to take command of the situation by his superior officer on July 7th. By 5.30 am, accompanied by Subedar Raghunath Singh and Major Bhat, he spotted enemies on the site. Captain realised that a full-frontal attack in the daylight was the only way to beat the enemies. He moved forward while crying “Durga Mata Ki Jai’ and killed five Pakistani soldiers alone. As 2 Pakistani soldiers were also killed by this point, their troops were retreating. Indian troops were slowly managing an upper hand.

Shortly, one of the Pakistani soldiers with a machine gun was spotted. As Captain Batra advanced towards him, one of his soldiers got injured. So, he called upon Sub. Singh and narrated a plan to take him to safety. But the Pakistanis were continuously firing bullets. The captain put himself in front and asked Sub. Singh to stay on the safer side as he had a family and children and Batra was not even married. In the process of evacuating the injured soldier, Batra was shot in the chest from a close range. Not less than a second later, he was hit in the head by a splinter from a Rocket Propelled Gun. The brave soldier immediately collapsed as he breathed his last.

The soldier had once told one of his close friends “I’ll either come back after raising the Indian flag in victory or return wrapped in it. But I’ll come back for sure”. The whole nation was in great grief when he returned as the latter. The country honoured Batra’s sacrifice by conferring ‘Param veer Chakra’ upon him on August 15th 1999.  Today, 21 years down the lane, tributes have been flowing on social media for the warrior on the day he sacrificed his life for India. A biopic on his life by the name ‘SherShah’ starring Siddharth Malhotra was also announced today.  The people who shared time with him in Kargil, still remember his famous phrase “Yeh dil maange more”. We will always remember and respect you, sir.

THE PLIGHT OF OUR HEALTHCARE WORKERS

#JUSTICEFORJYOTHI IS NOT FOR THE ‘CYCLE GIRL’