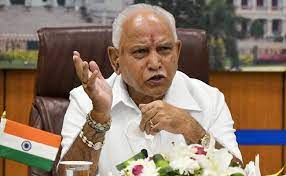 There have been talks of change in the leadership of the Karnataka government for quite some time now. It gained more attention after Yediyurappa visited Delhi.

Amidst the notion of speculation of leadership change in the government of Karnataka, a Lingayat seer, Sri Sangana Basava Swamiji of Kottur Veerashaiva Shivayoga Mandir alleged “an RSS conspiracy”. This was to eliminate Yediyurappa as the chief minister.

Lingayat seer spoke to some reporters in Hospet and stated “ RSS is a caste-based organization and it has no liberal-minded leaders. The reports announced that the RSS wants to replace Yediyurappa with the union minister for mines, Pralhad Joshi. If BJP plans on replacing the chief minister, it will lose its existence in Karnataka and this will benefit other parties like Congress or JD(S).” said the seer.

A delegation of several Lingayat seers led by Sri Siddalinga Swami of Siddaganga Mutt in Tumkur met the chief minister in question at his residence. They urged him to complete his term as chief minister. Seers from various mutts in the state, and a few congress leaders of the lingayat community have displayed their love and support towards Yediyurappa.

This week Wednesday, 21 of July, the CM tweeted, “I am privileged to be a loyal worker of BJP. It is my utmost honor to serve the party with the highest standards of ethics & behavior. I urge everyone to act in accordance with party ethics & not indulge in protests/indiscipline that is disrespectful & embarrassing for the party.”

Siddalinga Swamy, a member of the Lingayat seer community, asked the BJP to refrain from removing Yediyurappa from his post as chief minister. “In difficult times like the covid-19 pandemic, Yediyurappa is doing good work. In these times of difficulty, the news about leadership change is not necessary. We want him to continue till the next Assembly elections due in April 2023”, said Swamy.

The reporters questioned the Lingayat Seers about their involvement in politics.  Siddalinga Swamy said “We are not involved in politics, we seers are only concerned about the future of the state. When Yediyurappa is doing good work, we are here to give our support and our only request is that he complete his term. All political parties are important to us.”