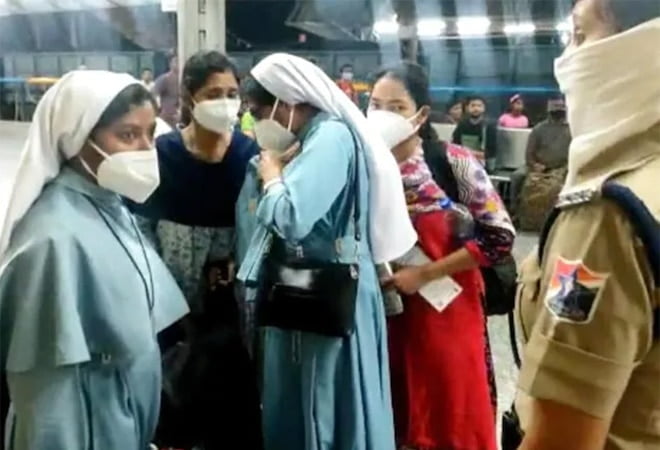 Fresh news day comes with a fresh, new, and unacceptable news. Communal disharmony is hampering our social relations and tampering the peaceful environment. One such case of disrupting the normal flow of life took place in UP.

The incident took place on Friday, 19 March. Two nuns and their two novices were heckled and forced to get off a train in Uttar Pradesh’s Jhansi by members of the Akhil Bharatiya Vidyarthi Parishad, who suspected them of conducting religious conversion. They were allowed to proceed only after an inquiry at the railway station established there was no conversion involved. The ABVP is the student’s wing of the Rashtriya Swayamsevak Sangh, the ideological mentor of the BJP.

Union minister Amit Shah has promised action in the matter. “Those involved in the Jhansi nuns’ harassment incident will be brought before the law,” Mr. Shah said today.

This incident has created an outrage all over the country. Chief Minister of Kerela Pinarayi Vijayan wrote a letter to our Home Minister addressing this issue and seeking immediate and strict actions against those involved in this.

“Such incidents tarnish the image of the nation, and its ancient tradition of religious tolerance. Such incidents require utmost condemnation by the Union government. I would request your kind intervention to instruct authorities to take strict action on all groups, individuals who disrupt, impair the freedom of individual rights guaranteed by the constitution,” the Chief Minister wrote.

The nuns were travelling on the Haridwar-Puri Utkal Express on March 19. A 25-second video from the train compartment shows the women surrounded by some men, some of whom appear to be policemen.

“There were some members of the ABVP who were returning from a training camp in Rishikesh on board the Utkal express to Jhansi. Four Christian ladies were travelling on the same train from Hazrat Nizamuddin in Delhi to Rourkela in Odisha. Two of them were nuns and two were under training. These members of the ABVP suspected that these two nuns were taking the other two women for conversion because the nuns were speaking to the other ladies. On this suspicion, they informed the Railway Protection Force who in turn informed the railway police. These ABVP members also gave a written complaint about conversion. I reached the spot and made inquiries. These inquiries revealed that the two other women were from Odisha’s Rourkela and were under training. We checked their certificates and both had 2003 baptism certificates and this proved both women by birth were Christian and that no conversion was involved. After this we sent all four women onwards to their destination in Odisha,” Naeem Khan Mansuri, the Superintendent of Railway Police in Jhansi said in a detailed statement.

Congress leader Rahul Gandhi in reaction to this incident has said in a tweet, “The attack in UP on nuns from Kerala is a result of the vicious propaganda run by the Sangh Parivar to pitch one community against another and trample the minorities. Time for us as a nation to introspect and take corrective steps to defeat such divisive forces.”

“I want to assure the people of Kerala that the culprits behind this incident will be brought to justice at the earliest”, said Amit Shah addressing a rally in Kerala. Such incidents does bring shame to the nation and puts a question mark to the administrative system. Now what actions will the government take in this regard is awaited.