Now the Nation Really wants to know: Is it Politics or Justice? 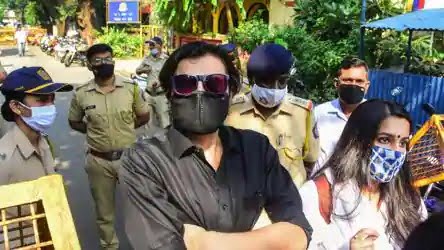 #Republic TV owner and Editor-in-chief #Arnab Goswami on Wednesday was picked up by the #Maharashtra Police and taken to #Raigad in connection with a 2018 suicide case.

Interior designer Anvay Naik, along with his mother Kumud Naik, were found dead at their bungalow in Alibaug in May 2018. The police said Anvay, had committed suicide, the post mortem report of Kumud indicated that she had been strangulated and did not commit suicide.

Police believe Anvay killed her before committing suicide. Following that, the police registered an accidental death report and a case of murder. While Kumud’s body was found on the ground floor sofa, Anvay was found hanging on the first floor by the caretaker of the bungalow.

Why was an FIR registered against Arnab Goswami?

The police had found a suicide not written in English in which Anvay said he and his mother decided to take the extreme step on account of payments due to them not being cleared by the owners of three companies – television journalist Arnab Goswami of Republic TV, Feroz Shaikh of IcastX/Skimedia and Niteish Sarda of #Smartworks.

The three firms owed Naik’s company, Concorde Designs Pvt Ltd, Rs 83 lakh, Rs 4 crore and Rs 55 lakh respectively, the note added. An officer said that during the investigation they found that Anvay was in heavy debt and was struggling to repay money to contractors.

The Raigad police also found that Naik had an NC registered against a contractor in Mumbai after the latter had threatened him to repay the money he had taken. Goswami had however denied this charge and said that he had made the payments.

What happened to the investigation in the case?

The local Raigad police that has been investigating the case closed the case in April 2019 saying that they did not find evidence against the accused named in the suicide note, including Goswami.

However, in May this year, Anvay’s daughter approached the Maharashtra Home Minister Anil Deshmukh seeking the case be reopened. Maharashtra Home Minister Anil Deshmukh had tweeted in May, “Adnya Naik had complained to me that Alibaug Police had not investigated non-payment of dues from Arnab Goswami’s public which drover her entrepreneur father and grandma to suicide in May 2018. I’ve ordered a CID re-investigation of the case.”

Adnya had also alleged that the police had not investigated the angle of Rs 83 lakh that Goswami had not paid her father that drove him to commit suicide.

While the Home Department had transferred the case to CID in May this year, officers outside Arnab’s residence Wednesday said the very court where the Raigad police had filed a closure report had given permission to Raigad police to reopen the case now. CID officials said they have no case against Goswami.

What happens in this case?

The Maharashtra Police will now be questioning Goswami and ask him to provide evidence to back his claims that he had made the payments due to Anvay. Depending on the investigation they will decide to either close the case or charge sheet him.

Is this linked to the case being pursued by Mumbai Police?

No. This has no links to the cases Goswami faces in connection with Mumbai police. A team from Mumbai Police went to his residence on Wednesday morning to assist the Maharashtra Police.

What cases does he face in Mumbai?

Republic has been named in the #TRP scam where the channel along with five others was allegedly involved in making payments for boosting TRP’s. Republic has denied the accusation. An FIR has been registered against Goswami for ‘incitement to disaffection’ over a show in which the channel said that several officers in Mumbai police were against action of Commissioner Param Bir Singh.

Apart from this, two FIR’s were registered against Goswami for allegedly communalising incidents like the gathering of migrants outside Bandra railway station and the lynching of Sadhus in #Palghar. Following these two FIR’s chapter proceedings too had been initiated against Goswami and he was asked to sign a bond of good behaviour.

Goswami had approached the #Supreme Court against these FIR’s and was asked to approach the Bombay High Court that is currently hearing the matter. He was also issued a show cause notice by the Maharashtra Legislative Assembly for initiation of breach of privilege motion against him for reportage related to the case of actor Sushant Singh Rajput’s death. Goswami challenged this in the Supreme Court as well.