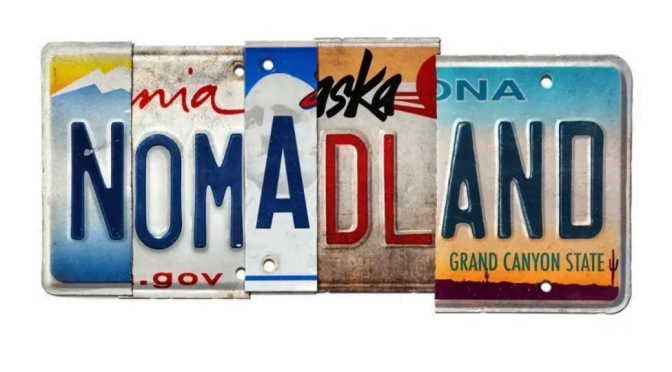 Nomadland, an American drama film of 2020 lies between a documentary and fiction. A piece of art based on the 2017 non-fiction book written by Jessica Bruder, named Nomadland: Surviving America in the Twenty-First Century. As the name of the book suggests, it’s based on the life of a middle-aged woman, who survives the 21st century in America, after losing her job in the fallout of the Great Recession. This takes Fern (a middle-aged woman) on her new journey as a Nomad, without a permanent home. A nomad is referred to as a wanderer, never stops in one place and just goes on like the journey of life. This Oscar-winning piece has given us the essence of life in a basic way.

The nomad of this movie or as we know, Fern started her journey in a van, looking for seasonal jobs to earn for her survival. In the starting scenes, we encounter a beautiful part where a little girl asks Fern that, is she homeless? On which Fern answers back, “I’m not homeless. I am houseless. There’s a difference.” Like this, there are many such subtle elements in the movie. Chloe Zhao, the director of this cinematic slice has given “home” a whole new meaning. After watching it, one cannot argue that a home is a place where you live with your family, in Nomadland, Fern’s home was his van, one that accompanied him throughout her journey. Further, she also declares that home is what you carry within you.

Nomadland was more like a reality than a motion picture, because of its cinematography, direction, and acting. Not only this but Zhao has casted actual nomads in supporting roles to make it more lively and realistic. The movie was shot and directed in a way that one cannot distinguish it from reality, as in most of the scenes, the protagonist was found walking or driving, doing the basic things one does in her day. From dumping in her van to swim in a pond, each part is shown without including any unrealistic drama, it was as plain as one’s life. While encountering such realistic scenes, we came across a scene where McDormand (played the role of Fern) is fully naked in a pond, this is where the movie blurs the line between reality and cinema, it purely portrays the life of a commoner.

This artistic piece can feel like a slow Zephyr but it teaches you a lot about life. Looking at Fern’s life you can conclude that life does not wait for anyone, it just goes on. Someone lives, someone dies but one who never stops, is Life.
The life of nomads is not something that can be romanticized, so it may look boring in the starting. But as soon as you hold on to the essence of reality it touches, you will be attached to it. It’s nothing but an opus portraying the real Survival. A middle-aged woman, after losing her better half was learning to live again. A voyage has begun for her, it wasn’t some solo trip to self-discovery rather it was a journey of existentialism. She did part-time jobs, came across people who in their 70’s weren’t ready to give up and all this taught, that her that you must persist your way, till the end. Life will give you many reasons to stop but you must have an aim to live.
The characters of the movie have their own suffering, but what’s common is how they led their lives on their own. Each of them added a whole new meaning to “Self-reliance.” Their contribution made the movie earn uncountable awards, starting from the Critics Choice award, Academy awards and whatnot.

A motion picture reflecting reality is a worth watch.