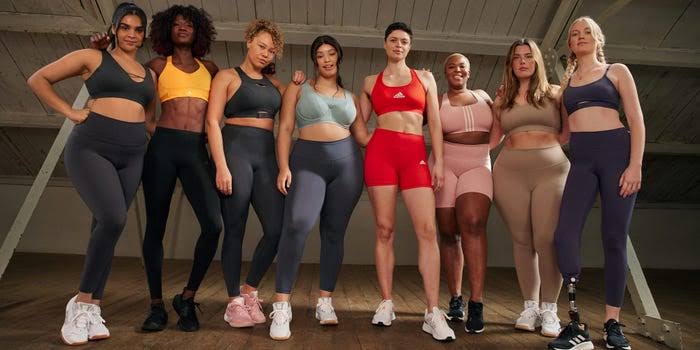 Adidas’ new sports bra ad has been banned for being ‘too graphic.’ In a grid arrangement, the new advertisement showed photos of bare breasts of varied skin colours, shapes, and sizes. The advertisement was distributed in three forms: a tweet and two posters.

We believe women’s breasts in all shapes and sizes deserve support and comfort. Which is why our new sports bra range contains 43 styles, so everyone can find the right fit for them.

Objections were voiced online shortly after the advertisement was launched. According to sources, the Advertising Standards Agency found all three versions distasteful and potentially offensive, and hence decided to ban them.

The advertisements, according to the firm, “show just how diverse breasts are” and hence how crucial the right sports bra is.

However, an Adidas UK spokeswoman told the BBC that the company stood strongly behind the slogan that was still shown on its website.

“The reasons we didn’t make just one new sports bra,” read the two posters, which featured cropped photographs of 62 and 64 women.

The first campaign was posted in February with the text, “We believe women’s breasts in all shapes and sizes deserve support and comfort. Which is why our new sports bra range contains 43 styles, so everyone can find the right fit for them.”

According to the ASA, the campaign’s use of nudity was gratuitous, objectifying women by sexualizing them and “reduced them to body parts.”

Some people had contacted them, inquiring whether the posters should be shown where children could see them.

The brand’s message was also widely covered on Twitter.

The ASA concluded that posters should not be exhibited in areas where children could see them. The photographs were created to “reflect and celebrate different shapes and sizes, illustrate diversity, and demonstrate why tailored support bras were important,” according to Adidas UK.

The photographs had also been cropped to safeguard the models’ identities and guarantee their safety, according to the brand. The models had all volunteered to be in the campaign and were supportive of its goals, according to the firm.