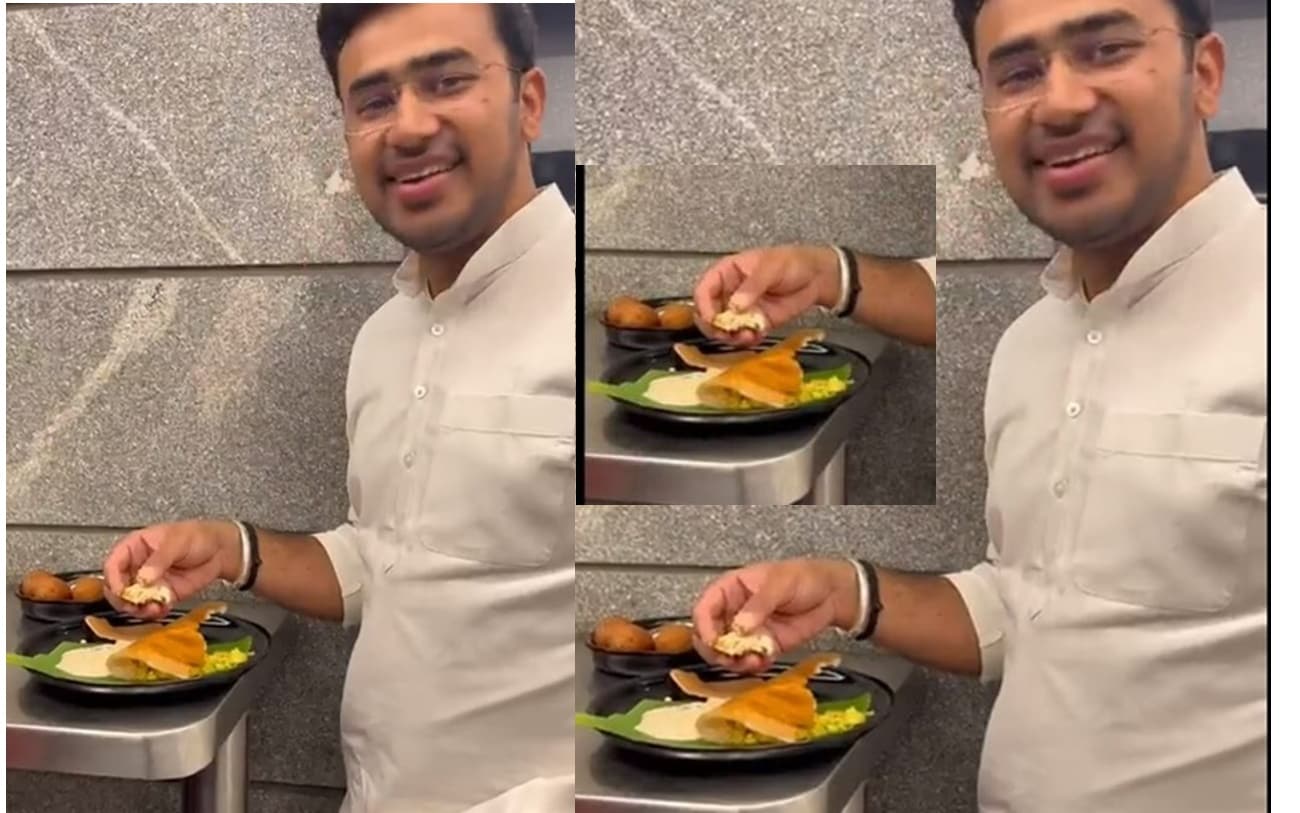 In a viral video, a Member of Parliament (MP) Tejasvi Surya can be seen eating and having a gala time in a hotel. At the same time, the city of Bengaluru drowns in the floods. Representing Bengaluru South, Tejasvi Surya stated that he was tempted to try Benne Masala Dosa after seeing pictures of the food dish on Instagram.

In the video, he could be seen eating a hearty breakfast and promoting the restaurant where he was having his breakfast. While he was having breakfast, Bengaluru saw one of the worst floodings.

In the video, he could be heard saying, “I am here at the Saatvik Kitchen in Padmanabhanagara. I came here after I was tempted after looking at photos of dose posted on Instagram. The ‘benne masala dose’ is very nice. Please come. You will know the taste once you try it. Do try the ‘uppittu’ as well,”

Here is the video of Tejasvi Surya having breakfast:

As an MP, Mr Surya is not only responsible to his constituency but the city as well. While the city was drowning, he could have made efforts to lead rescue operations or tabled a policy or a bill that would help improve the town’s infrastructure. The plight of the citizens precedes eating a benne masala dosa. He enjoys immense influence in his party, where he could have advocated for better infrastructure in the city and even mobilized BJP grassroot workers to help the citizens in this hour.

According to the Indian Meteorological Department (IMD), September 5 was the wettest day since 2014, as the city had recorded 131.6 mm of rainfall in 24 hours.

Here is what Twitter has to say about this!

Video dated 5th September.@Tejasvi_Surya was enjoying a good breakfast while Bangalore was drowning.
Has he visited even a single flood affected region? pic.twitter.com/uFnZ4Rjs1m

This is what happens when you elect fanaticism over governance.#tejasvisurya seen relishing food & busy enjoying his life when #Bangalore is drowning. #bangalorefloods #bangalorerains #bangalorerain pic.twitter.com/ZOupVhpapz

This we why need to be more careful while electing our representatives. When half of the Bangalore is flooded, this child chapathi is enjoying dose as if nothing has happened.

Bjp yuva morcha national president @Tejasvi_Surya is missing from banglore
I know from starting he is coward ……& and only expert for giving speeches ,
Original #Pappu of karnataka #tejasvisurya 🙃🥂

People of Bengaluru facing challenges, Everywhere filled with water due to heavy rains but State Government is busy in Hate campaign & Bengaluru MP @Tejasvi_Surya is busy in MasalaDosa. This is the real face of @BJP4Karnataka . #tejasvisurya is missing. #bengalururains pic.twitter.com/QZMlWAfb7H