The modern-day gentleman of Cricket, Virat Kohli finds himself in the middle of a ‘fake fielding controversy’. Although just a few years ago, fake fielding antiques were considered to be ‘masterstrokes’ from the fielding team to bluff the batter.

It was as late as 2017 when the legality of ‘fake fielding’ was put under a scanner. Marnus Labuschange was the first player to be penalised with the same.

Often considered to be one of the greatest ever to play the game, Kumar Sangakkara was involved in a fake fielding controversy in 2013. In a One Day International game between Sri Lanka and Pakistan, the Wicket – Keeper pretended to take off the bails to make Ahmed Shehzad dive in the crease. From what was apparent, it did not seem that the former Sri Lanka captain was trying to claim the wicket of the batter.

Although done for comedy effect, the Pakistani batter did not seem to enjoy the moment as he seemed irritated while on the ground.

The former captain of the Indian team is known for his street-smart tactics while keeping. The former wicket-keeper-batter was famous for his mindfulness and for tackling the batters and even fielders.

In the second One Day International game between India and Sri Lanka at Mohali in 2017, Dhoni used this trick. When Lahiru Thirimanne and Angelo Mathews were at the crease, the latter ran hard to complete the second run toward the striker’s end. Indian keeper, MSD got ready to collect the ball from the third man, however, when he realized that the ball will be hitting the ball straight to the stumps, he backed off. 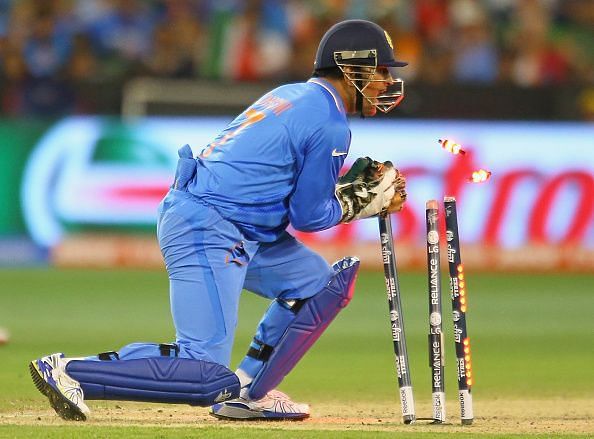 Pakistan was touring the African country in 2021. The new-look side led by Babar Azam played well throughout the tour, but it was the rather infamous run out which went on to become the most remembered part of the series.

Batting first, South Africa posted a mammoth total of 341 runs. While chasing the total, the Pakistani side was well in the game as they were aggressively moving towards the target, even after a collapse in between. The chase was led by southpaw Fakhar Zaman, who batted brilliantly for his 192. In the last over, Pakistan needed a record 31 runs to win, but with Zaman on strike, the batting team still had a little hope.

Zaman hit the ball toward long-off and ran hard to collect an easy double. While running back to the striker’s end, South African keeper, Quinton De Cock, signaled the fielder to throw the ball toward the non-striker’s end, while the ball was coming to him. Zaman fell for this, reduced the speed, and in the end fell short to cover the ground. Pakistan lost the match by 17 runs.