MYSORE DASARA – A JOURNEY DOWN THE MEMORY LANE 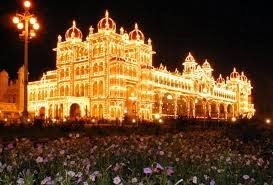 For the folks of Bengaluru, and a lot of cities in Karnataka, watching the Dasara Parade or the #JambuSavari is just as ritualistic as watching the Independence Day and the Republic Day parades on the DD channel. With the ever-increasing scare of the Covid-19 spread and infection, the government of Karnataka has released a set of regulations so as to have a safe Dasara. It has decided to make this year’s event quite a low-key affair.

In regards to upholding the tradition, the festivities this year are curbed down to the basic necessary levels. Chief Minister Yediyurappa has said that “the popular food mela, YuvaDasara, sports meet and other cultural events will not take place this time…”

Thinking about the event itself has got us all quite nostalgic and so, here is a trip down memory lane, exploring and tracing the origins of the celebrations. In Mysore, the festival of Dasara is celebrated to commemorate the triumph of the #Shakti, goddess Chamundeshwari over the #Evil forces such as the demon Mahishasura. It is important to recall here that the city gets its name from this #Asura.

The first ever celebration of Mysore Dasara dates back to the year 1610, which was initiated by Wadiyar King Raja Wadiyar I. Over time, certain traditions have been altered; however the celebration reached its peak during the reign of Nalwadi Krishnaraja Wadiyar IV (1894-1940).

Historians have observed that since 1947, the festival has lost its vibrancy, due to the loss of authority and kingdom culture, however the citizens of this present era are more than glad to have witnessed the event at all.

The most common observations of this festival are the #Lakshadeepa, or the one lakh lights lit each night for the ten days of the festival. The Savari, the herd of elephants following the main leader carrying the royal golden throne of the palace whilst the king in charge is seated on the #Ambari is one of the main attractions of the festival. This is observed on the last day of the festival, the #VijayaDashmi, where the royal possession starts its journey from the palace and ends at the Bannimantap.

As the sun fades away, many cultural dances and traditional exhibitions are witnessed. The #MallaYuddha (wrestling), and the #PanjinaKavayithu or the torch light parade are the talk of the town, this season – every year. One other thing we as Kannadigas very fondly remember about the Dasara festivities is the numerous activities and competitions that people from all wakes of life would participate with all their enthusiasm.

Several age old games like the Snake and Ladder, #AliGuliMane and the #GilliDanda would be organized alongside several fairs such as the Heritage Dasara, Yuva Dasara, the exhibitions, flower show and the film festival.

Citizens of Karnataka, deeply disturbed by the coronavirus have no other choice than to reminisce the major attractions of last year such as the car rally, the kite festival, the pet show and the chitra santhe among many others and hope to see them all again next year with a fresh purview of life.