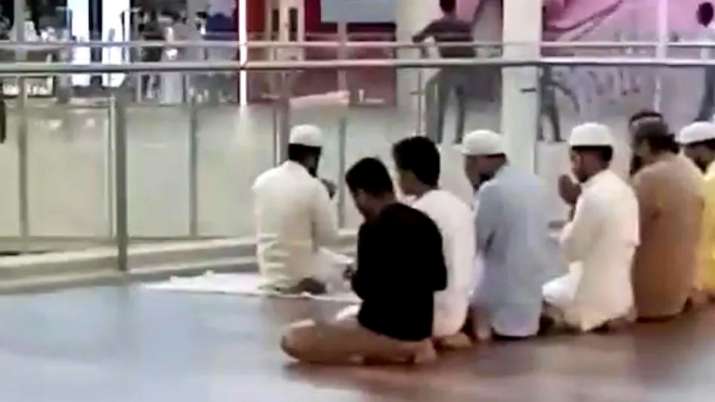 The CCTV footage of Lucknow’s Lulu Mall has revealed that eight men who had become the centre of a controversy by praying namaz on Wednesday, actually did not perform it correctly. They were either amateur or probably even non-Muslims!

Hindu groups had flagged questions over the viral video, saying that if the men were allowed to pray namaz, they too should be allowed to recite the Hanuman Chalisa in front of the mall. They had also alleged that over 70% of staff employed were Muslims and went on to label it as a part of ‘love jihad’. However, records of mall employees as shown to the police and the right-wing groups confirm that this claim is absolutely false.

Asia’s biggest mall, Lulu Mall in Lucknow- was formally opened on Monday, while the incident occurred on Wednesday. The CCTV footage confirms the suspicion that the incident was part of a conspiracy to malign mall authorities and trigger communal hatred in a city where Hindus and Muslims have lived peacefully together.

The footage shows eight men entering the facility together. They do not attempt to explore the mall or visit any showrooms. They did not buy anything and were not interested in taking selfies. They seem to be in a rush and began seeking a spot to offer Namaz. They began in the cellar, then moved on to the ground level and first floor, where they were halted by security officers. They then went to the second floor, which was not crowded. Six of the men sat down right away and two others started recording videos and taking photographs.

While it takes 7 to 8 mins to complete Namaz, these men completed it within 18 seconds flat. Activist & social worker Tahira Hasan, who had flagged concerns of a conspiracy early on, said that the men were ignorant of the fact that Namaz is always offered facing the Kaaba. This direction is roughly the west direction in north India. While all of them face the West, one of them has his face in a different direction.

If those performing Namaz in Lullu Mall didn’t know which way to face, they were surely non-Muslims in disguise.
That is a deep conspiracy.

Additional Deputy Commissioner of Police (South), Rajesh Kumar said that the footage clarified the men had no clue about how Namaz is offered. He was hopeful that the miscreants would be arrested soon.

On Friday another video was shared on social media of a young man offering Namaz on Platform no. 3 at Charbagh Railway Station. This was immediately flagged by right-wing groups who demanded removal of 900-years-old Mazaar of Khamman Peer nestling between the railway tracks. Ironically, more Hindus offer prayers at the Mazaar than Muslims.

Social activist Deepak Kabir points out that devout Muslims are hardly likely to devote more attention in making videos rather than offering prayers.