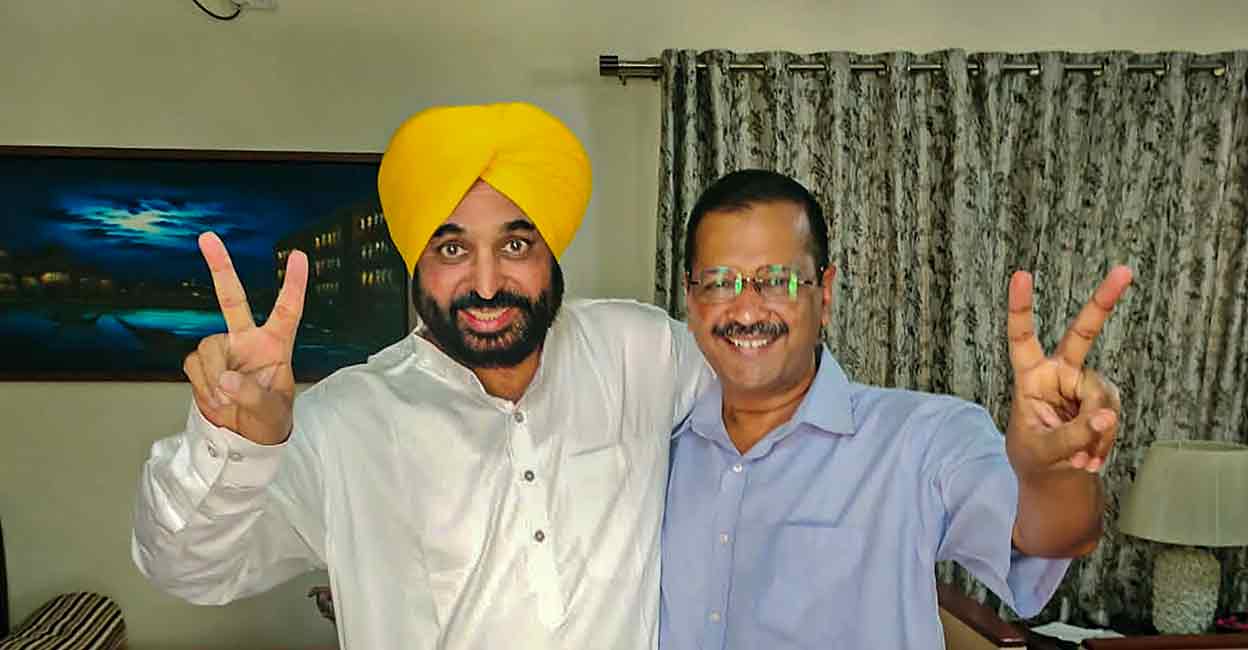 Kejriwal posted a picture of him and AAP's chief ministerial candidate and MP Bhagwant Mann flashing the victory sign together.

From the title, it appears that Mr Bhagwant Mann must be a war hero or must have fought in a war, however, that is not the case. Mr Bhagwant Mann, like Ukraine’s President, Volodymyr Zelensky, began his political career as a comedian and actor. Mr Mann is the face of CM for the Aam Admi Party (AAP) in Punjab.

The AAP’s victory was unexpected, as the party won the majority of seats in the state. After the first six hours of vote counting on Thursday, the AAP had won 92 seats out of the 117-seat assembly. While several media houses and political analysts stated that AAP would win, there were apprehensions.

Mr Mann was born in Satoj village in Sangrur. He was born to a school teacher’s family and had tasted his first fame at the age of 18 when he released his first maiden audio cassette. When he first achieved his fame, he pursued B.Com from Shaheed Udham Singh Government College in Sunam.

While pursuing his B.Com, he participated in several youth festivals and inter-college competitions. He not only won several awards; he was also well-known for his skits in the regional languages. He soon became the face of comedy. Due to his experiences and excellent performances, he began appearing in several local TV serials such as Jugnu Mast Mast, The Great Indian Laughter Challenge and so on.

Mr Mann also spoke on several social and political issues through his satire. He even spoke about several politicians, police officers, industrialists and sports personalities.

Mr Mann wanted to do more with his life, so he entered politics and left his job as a comedian. He joined the People’s Party of Punjab (PPP) in 2011 and contested elections 2012 assembly polls from Lehragagga. However, he failed to score a victory there. Moreover, when PPP’s leader, Prakash Singh Badal, merged the party with the Congress in 2014, Mr Mann refused to join the party and accepted AAP’s invitation.

Since 2017, Mr Man became AAP’s face in Punjab and had addressed over 300 rallies. Mr Mann won by more than 58,000 votes in the 2022 assembly elections, and he also won from the Dhuri district.

Mr Mann will be breaking the tradition of taking the CM’s oath at the Punjab Raj Bhawan. Instead, he would take his oath in Khatkarkalan village, Nawanshahr district. The village is the ancestral village of Bhagat Singh. He has also barred all government offices from posting the photo of the CM as the custom, something similar to what President Zelensky did.

While speaking to the media, Mr Mann stated that his core area of focus would be building and uplifting schools, health, industry, agriculture, women’s safety and improving sports infrastructure. He has assured a significant change in Punjab within a month.