#JUSTICEFORJYOTHI IS NOT FOR THE ‘CYCLE GIRL’ 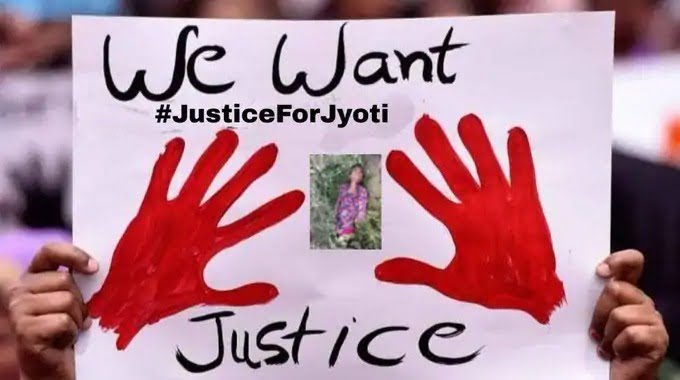 A 14-year-old Dalit girl, Jyothi Kumari was allegedly raped and murdered in Darbhanga in Bihar for stealing mangoes from an orchard. The accused is an ex-army man named Arjun Mishra who has been absconding since the incident came to light. On July 2nd, the girl had left her home at 6 am to bring mangoes. Family members were concerned when she did not return after a couple hours. She was later found dead in the orchard with stifled marks on her neck. Soon after, the villagers attacked the accused’s home and tried to attack his wife who was rescued by the police. FIRs have been registered against Mishra, his wife and another man living near their house.

There was a confusion on social media as Jyothi Paswan was in news in May for cycling 1200 kms in just 7 days to reach Bihar, as her diseased father was on the backseat. She came to be known as ‘Cycle girl’. When another young girl by the same name, from the same region died, netizens mistook ‘Cycle girl’ for the victim. Photo collages with the image of the girl on the cycle and the girl lying dead was circulated on social media describing how the girl with such an accomplishment met with an ill fate. A hashtag #JusticeforJyothi started trending.

The confusion occurred as both the girls share the same first and last names. Cycle girl’s father’s name is Mohan Paswan and the deceased girl’s father is Ashok Paswan. The cycle girl then sent pictures of herself to news agencies and confirmed that she is alive. She said “I am fine and very much alive. Nothing has happened to me. The death of a girl by the same name has occurred far from where I stay. Her father’s name is Ashok Paswan. Since we both share the same name, people thought it is me who has died”. She also said that she is preparing for her next cycle expedition.

The victim’s father claims that his daughter was murdered by Arjun Mishra for stealing mangoes. Talking to The Quint, a popular news website, Baburam, Superintendent of police said that the post-mortem report shows that the minor died of electrocution and suffocation. The report doesn’t show that she was raped. However, they are still investigating the case and will soon confirm the truth.

The minor might have been electrocuted as Mishra used an electric fence to guard his orchard.

Electric fence is a barrier used to restrict animals and human beings from crossing boundaries of a property. When come in contact, the shock can affect the passer adversely ranging from discomfort to death, depending on the voltage. There is no provision in the Indian law to erect electrical fences without a permit from the authorities. Even with that, there is a limit on the voltage of current that can be passed through those wires. A lot of animals, especially elephants and some human beings have lost their lives to the electric fence across various states of the country. The law is in place to precisely avoid casualties like these. The police in their investigation might now check if Mishra’s electric fence had legal permits and was within the voltage limit.

Social media activists are now furious as this case isn’t receiving enough coverage from the mainstream media. They are alleging that it has something to do with Jyothi Kumari being a Dalit and Arjun Mishra a Brahmin. They are also extremely upset as the cases of caste and gender-based violence are increasing every day and there is no proper punishment policies for the crime. They are tagging the official Twitter account of PMo to take stricter actions in the matter. The hashtag #JusticeforJyothi is still trending on Twitter and tweeters are now nominating other people to retweet the story with the hashtag to spread awareness and bring justice for the young girl and her family.

The public will now have to await the completion of investigation by the police for the truth to be revealed. No matter the cause, the loss of a life, especially of young ones, tug at our heart strings. Every such incident is a wake up call to all of us to oppose the atrocities faced by the minorities of our country. We sincerely hope that justice is delivered to Jyothi Kumari and her family.

THE ONLINE EDUCATIONAL PLANS OF STATE AND CENTRAL BOARDS