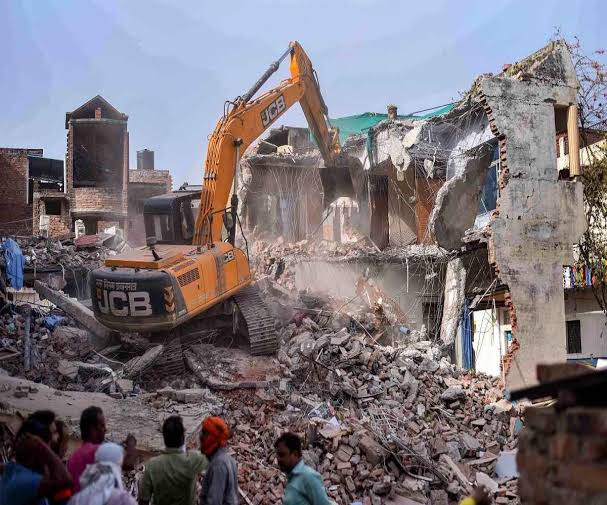 Bulldozers were sent in by the state of Uttar Pradesh, who then demolished countless homes in Prayagraj and Saharanpur on the pretext that they had been built illegally. Coincidentally, these were the same parts of Uttar Pradesh that broke out in protest in response to Nupur Sharma’s remarks against Prophet Muhammad.

Amoung the endless destruction caused by these government forces, the subject of student activist Afreen Fatima’s home, which was also destroyed, has garnered a lot of attention and solidarity. Following the demolition of her home, a lot of individuals expressed their support online, and the hashtag #IStandWithAfreenFatima became popular on Twitter.

Afreen Fatima, who attended Jawaharlal Nehru University in the past and even she served as the previous president of the Women’s College student union at Aligarh Muslim University, is a student activist. One of the most active protesters in Delhi’s Shaheen Bagh neighbourhood during the anti-CAA/NRC demonstrations in 2019, she also spoke out on a number of topics affecting Muslim women, such as the debate over the hijab in Karnataka.

The demolition’s frightening symbolism, supported by bulldozers and police deployment in the neighbourhood, was specifically planned to terrorize other Muslim activists who might be considering organising a protest against the government.

Let’s draw a comparison here.
Israel engages in a practise known as “punitive demolitions” in the occupied Palestinian area. As a kind of “terrorist” punishment, Israeli authorities frequently bulldoze Palestinian homes; this tactic has been well-documented by the UN Human Rights Office and is even considered a war crime.

The demolitions are intended to send “a severe message of deterrence to terrorists and their accomplices – that they will pay a price if they continue their terrorist activities and harm innocent people.” according to official statements made by Israeli officials.

Senior members of the Bharatiya Janata Party, which is in power in India, have openly admitted to employing home demolitions as a form of punishment.

Israeli-American anthropologist and director of the Israeli Committee Against House Demolitions Jeff Halper writes about house demolitions in Palestine in his book Obstacles to Peace. He observes that “in Jerusalem, a favoured practise is to deliver an order at night by placing it somewhere near the targeted home, then arriving early in the morning to demolish.”

This is exactly what appears to have happened in the case of Afreen’s house being demolished on June 12.

His home is not the first in recent memory to be demolished arbitrarily with a bulldozer. It comes after a string of other such demolitions in the BJP-ruled states of Madhya Pradesh and Uttar Pradesh.

However, this is sadly a common occurrence. There is “no place for Rohingyas and Bangladeshis” in Delhi, according to Adesh Gupta, leader of the BJP’s Delhi unit, who also claims that they incite riots.

Uttar Pradesh CM Adityanath made it a point to have bulldozers positioned at the gathering venue during rallies during the most recent assembly elections in Uttar Pradesh as a display of power and defiance – to lash out against opponents who disagree with his anti – minority politics.

Angshuman Choudhury, a Senior Research Associate at the Centre for Policy Research rightly said that “It is not surprising that Modi’s India is starting to look more and more like Israel with each passing day. The real tragedy, however, is that a significant chunk of the majority in India is fine – delighted, rather – about this frightening metamorphosis. They want to embrace the bulldozer as a national leitmotif.”

With each passing day, the BJP’s anti-minority and anti-muslim rhetoric becomes clearer and clearer. In a democratic country, how we have let it get to this point, is a question that begs answers but receives none.