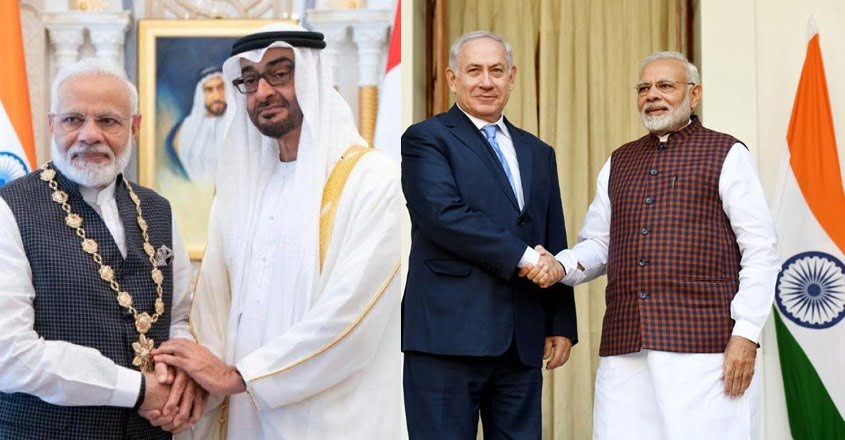 U.S. President Donald Trump on Tuesday hosted Israeli Prime Minister Benjamin Netanyahu and foreign ministers of the United Arab Emirates and Bahrain for the signing of the historic Abraham Accord, which is the first Arab-Israeli peace deal in 26 years.

India had welcomed the historic decision announced by Israel and the UAE to fully normalize relations. Soon after the announcement was made on August 13, UAE Minister of Foreign Affairs Abdullah bin Zayed Al Nahyan called up his Indian counterpart S. Jaishankar to brief him on the development.

“India has consistently supported peace, stability and development in West Asia, which is its extended neighbourhood. In that context, we welcome the full normalization of ties between the UAE and Israel. Both nations are key strategic partners of India,” Anurag Srivastava, spokesperson of the Ministry of External Affairs said soon after at a press briefing, adding that India “continues its traditional support for the Palestinian cause.” “We hope to see early resumption of direct negotiations to find an acceptable two-state solution.”

Ties with Israel, the UAE and Saudi Arabia are key pillars of India’s foreign policy in the region. It is important to note that India established full diplomatic relations with Israel only after the Madrid Conference in 1991 and the establishment of such relations by Arab countries like Egypt and Jordan. Since then, it has had to maintain a precarious balancing act between Israel and the Arab world. Therefore, India welcomed the announcement of the Abraham Accord, especially since it did not diminish Palestinian aspirations or expectations and was able to halt Israel’s annexation plans.

However, there are a number of other reasons why India has welcomed the normalization of relations between the two Middle Eastern countries — namely because it will foster greater trilateral cooperation and regional security.

Paving the Way for Trilateral Cooperation

India and the UAE have, over the years, deepened and strengthened bilateral relations, and their relationship has never been better than it is today. India considers West Asia its extended neighbourhood, and ties between the two countries span centuries. With the discovery of oil and the extensive development work undertaken by the UAE, India has been the source of much of its labour force. Indians make up the largest expat community in the country, which sends back hefty overseas remittances. This community has been a key bridge between India and the UAE.

More recently, ties with the UAE were elevated to the level of strategic partnership, spanning the sectors of trade, investment, culture, defense, education, science and technology. India is one of the UAE’s largest trading partners, which in turn is a major source of India’s energy security.

Similarly, India’s ties with Israel encompass numerous fields, particularly defense, academia, science and technology. Both countries are invested in innovation and start-ups. The Abraham Accord opens the doors for trilateral cooperation in a number of fields in which all three countries can come together to synergize their resources and strengths.

For example, India and Israel have established a technological innovation fund, which would benefit from the UAE’s participation. Similarly, Covid-19 has paved the way for closer India-Israel cooperation. The UAE — which is investing considerable energy and resources into the fight against the pandemic and has collaborations with India in the health industry — can be a valuable partner in this area.

There is similar potential for such collaboration in space and technology programs. India has a sophisticated and well developed space program and has an agreement with the UAE, as well as Israel, for joint space programs. Greater investment from the UAE and Israel would surely benefit the Indian diaspora in the UAE.

India has robust defense ties with both Israel and the UAE. While Israel has been a source of India’s defense procurement, both countries have now moved to defense partnership with joint production, like the Barak 8 long-range surface-to-air missile system, a joint venture between India’s Defense Research and Development Organization (DRDO) and Israel’s Israel Aerospace Industries. India is attracted to Israel’s advanced technology like electronic warfare and electro-optics, but at the same time wants to indigenize defense production. To that end, it has entered into agreement with Israeli companies this year for the joint production of UAVs.

All three countries — India, Israel and the UAE — face many similar challenges in the areas of defense and security, such as cross-border threats and long coastlines. A receding US footprint in the region — such as the withdrawal of its troops from Afghanistan and Iraq — necessitates regional countries to develop their own security architecture.

India has one of the world’s largest militaries and is indigenizing defense production, Israel has a solid defense manufacturing base and the UAE is modernizing its armed forces. The Abraham Accord opens up opportunities for collaboration in joint defense production, training, exercises, research and development between the three countries.

Counterterrorism and the Fight against Radicalism

It is important to note that all three countries have been victims of religiously motivated radicalism and international terrorism. The Indian government has prioritized the fight against international terrorism and has collaborated closely with both the UAE and Israel in the field of counterterrorism. Israel’s counterterrorism services remain one of the best in the world and all three countries stand to benefit from cooperation.

Following both the 9/11 attacks and then the 2008 Mumbai terror attacks, together with the rise of ISIS, India and the UAE have closely worked together. The UAE has extradited to India a number of persons wanted by India on terror charges, something that New Delhi highly appreciates. India has also sent a number of religious preachers to the UAE to participate in the country’s deradicalization program. In 2015, the UAE and India signed an agreement whereby the two national security advisers would meet every six months to discuss counterterrorism issues.

While India has been mostly insulated from global jihadism, this is changing with a number of Indian men and women recently joining the Islamic State-Khorasan Province in Afghanistan. At the same time, India has endured religiously motivated attacks from across the border. Both the UAE and Israel also face threats from ISIS, the Muslim Brotherhood and affiliated groups like Hamas and Islamic Jihad. Another emerging common threat is Turkey, which is actively supporting Muslim Brotherhood-affiliated regimes like the one in Libya and is also hosting radical leaders from groups like Hamas.

According to intelligence reports, there seems to be a Turkish attempt to radicalize communities in India, as well. Therefore, it is imperative that all three countries join hands to cooperate, collaborate and mount effective countermeasures to these threats.

Despite bouts of violence, India remains a vibrant and pluralistic society. At the same time, the UAE has placed a special emphasis on promoting religious harmony, tolerance and pluralism — establishing a paradigm in the Middle East. Normalization of UAE ties with Israel will help facilitate greater interfaith interactions, harmony and acceptance, dousing the fires of hatred and bridging religious fault lines. This has implications for India’s large Muslim population, as well as for India’s chaotic neighbours