KGF: Chapter 2, directed by Prashanth Neel and starring Yash, Srinidhi Shetty, Sanjay Dutt, and Raveena Tandon, was launched in theatres last week to a thunderous reception from the public. Several celebrities have applauded the film, while others have made some pointed criticisms about the Sandalwood industry in general. Read on to find out what Bollywood has to say about KGF Chapter 2’s outstanding achievements.

Kangana Ranaut praised Kannada actor Yash and compared him to legendary Bollywood actor Amitabh Bachchan on Instagram.
“@thenameisyash is the angry young man India was missing since man decades…
He fills that void which Mr Amitabh Bachchan left since seventies… Wonderful”
She also shared a collage of the two stars and remarked that “South superstars are grounded and deeply rooted in their culture… Apart from their talent and hard work their authenticity is what strikes the chord with the audience…” 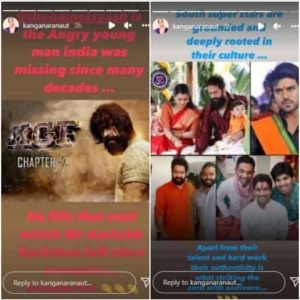 TV actor Shehnaaz Gill, gushed about the film KGF: Chapter 2. The Bigg Boss 13 contestant  expressed her enthusiasm for the film on Twitter.

Filmmaker Ram Gopal Varma, a notoriously tough critic, went on to compliment Yash and director Prashanth Neel for their work on KGF 2. RGV talks about how South cinema is doing better than Bollywood.

“@prashanth_neel’s #KGF2 is not just a gangster film but It’s also a HORROR film for the Bollywood industry and they will have nightmares about its success for years to come,” RGV tweeted after watching KGF 2.

R Madhavan congratulated Yash on his success on Twitter, hailing him as a ‘brother.’ He went on to say that he was hearing “amazing feedback” about KGF 2 and that he was “happy and proud” for Yash. “Rock it bro,” Madhavan said as he gave the crew a “super hug.”

Abhishek Bachchan, last seen in Dasvi, defended Hindi cinema and discussed the success of KGF: Chapter 2 in India. The actor went on to say that he does not believe Bollywood lacks enough content right now.

In an interview with The Indian Express, he claimed, “Are you telling me that Hindi films are not being remade in the South? That is an unfair question because no matter what you say the answer comes out defensive. We all are part of the Indian film industry.”

He added, “I understand why you might ask it because currently these films (KGF 2, Pushpa and RRR) are doing so well. But they have always done well. Our films have done well in South. It is not a new phenomenon. We are part of a large family.”

On Wednesday, Bollywood actor Ajay Devgan mocked Kiccha Sudeep’s remark on Hindi not being India’s national language on Twitter. In a tweet, the actor defended Hindi and referred to it as India’s national language.
Kiccha Sudeep had observed, in the backdrop of films like RRR and KGF Chapter 2 that have achieved success even with Hindi-speaking audiences that “You said that a pan India film was made in Kannada. I’d like to make a small correction. Hindi is no more a national language. They (Bollywood) are doing pan-India films today. They are struggling (to find success) by dubbing in Telugu and Tamil, but it’s not happening. Today we are making films that are going everywhere.”