How Constitutional is the Love Jihad Law? 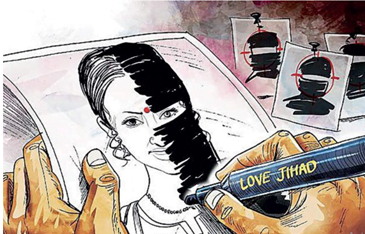 On November 24, the UP Cabinet cleared a draft ordinance against ‘forceful inter-faith conversion’, also known as love jihad. This is an anti-conversion law that is against using marriage to convert people.  The Uttar Pradesh Chief Minister, Yogi Adityanath has had this on his agenda even prior to his appointment as Chief Minister.

As per a report in the Indian Express, what prompted the government to draft the law was when a group of parents from Kanpur came together and met senior police officials and complained that their daughters had allegedly been trapped by Muslim men and are trying to break free.

The proposed law cleared by the UP Cabinet puts down punishments and fines under three different heads. Those found guilty of conversion done though “misrepresentation, force, undue influence, coercion, allurement or by any fraudulent means” in contravention of the law would face jail term of one to 5 years, and a minimum fine of Rs 15,000.

In case, such conversion is of a minor, a woman from the Scheduled Caste or Scheduled Tribe, then those found guilty of the offence will have to face a jail term of three to 10 years, with a minimum fine of Rs 25,000.

On the other hand, if such conversion is found at the mass level, then those guilty would face jail term from three to 10 years, with a minimum fine of Rs 50,000.

Any conversion will have to be approved by the District Magistrate two months in advance. The government will release a format in which an application must be filled for the same. It is the responsibility of the wishing to get converted to prove that it is not taking place forcefully or by any fraudulent means. In case, any violation is found under this provision, then one faces a jail term from 6 months to 3 years and fine of minimum Rs 10,000.

The proposed law is termed as “Uttar Pradesh Vidhi Virudh Dharma Samparivartan Pratishedh Adyadesh 2020” (prohibition of unlawful religious conversion), proposes that a marriage will be declared “shunya” (null and void) if the “sole intention” of the same is to “change a girl’s religion”.

Religious tolerance runs like a thread through the constitution of India and we pride ourselves on being the world’s largest democracy. This law gives the government the power to dictate the personal lives of citizens and trespassed on a right guaranteed by the Constitution of India in Article 19 that clearly states – an adult citizen has the freedom to choose who to lives and partner with, and to follow any faith of their choice. In addition, the constitution also states that neither the council, Khap panchayat, nor a democratic government, has the license to pass judgment on personal choices.

Various lawyers have stated that the IPC and the Hindu Marriage Act include multiple elements that safeguard those being forced to convert, minors and individuals from Scheduled Caste or Scheduled Tribe communities; thus making the Love Jihad law unnecessary. Allowing the state to examine subjective “intentions” behind men and women converting to another religion sets the law up for massive abuse. Mr. Sharat Pradhan, a UP journalist states that the move has been made to further propagate religious polarization for mere electoral purposes. Not only does it pit Hindus against Muslims, yet again, but also portrays Muslim men to be villains while victimizing Hindu women.

According to Radhakrishnan, an eminent philosopher, Hinduism is a way of life. If this is true, shouldn’t it accept and encompass every religion into its fold?

Chhalaang – Worth the jump from Remote to Prime Video?

Women who Inspire and Empower