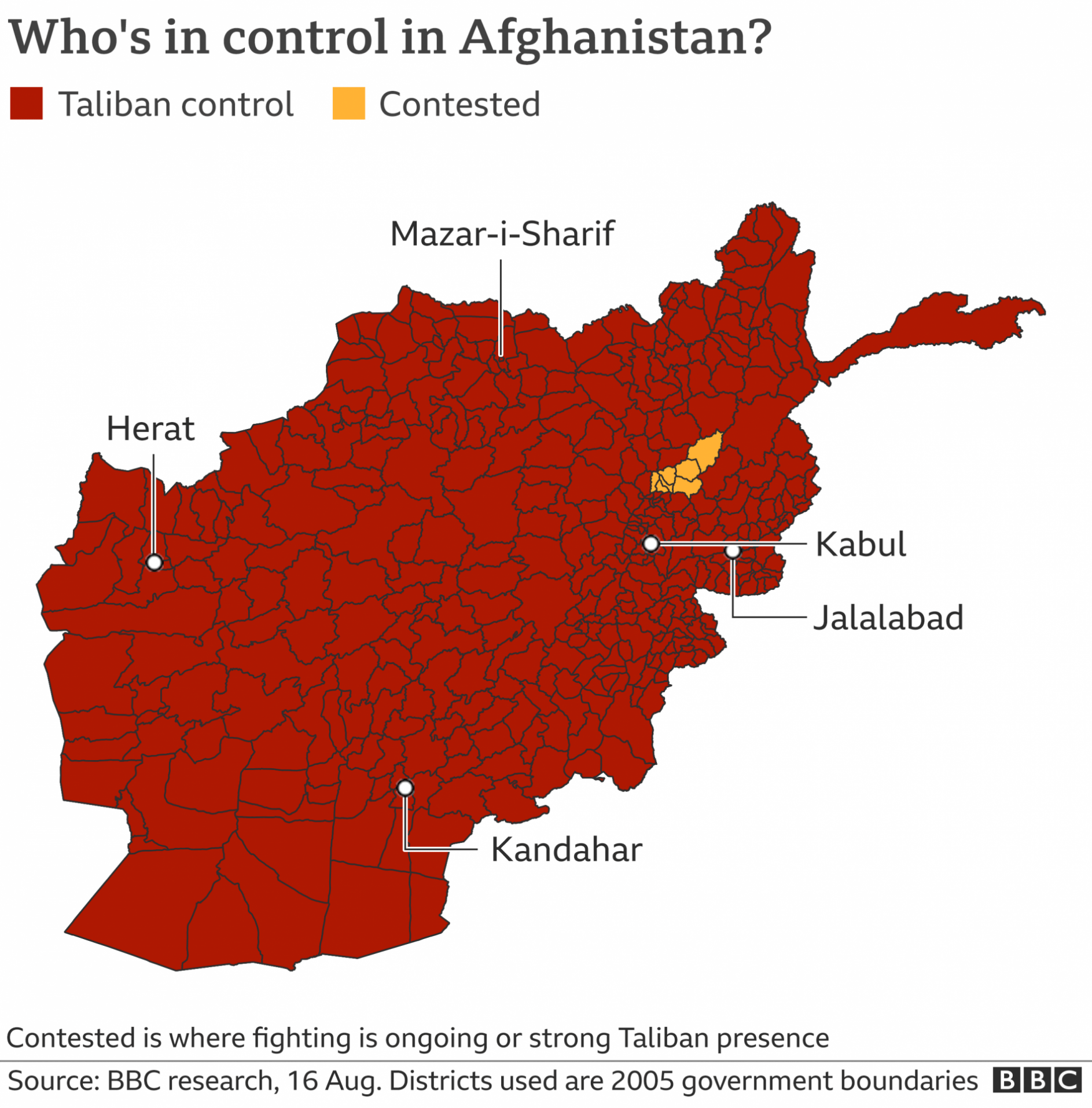 Territorial gains made by Taliban

After two decades Taliban returns to power in Afghanistan. In a single day Taliban militants captured the capital city of Kabul without even a fight. The takeover has been completed even before the US could completely withdraw its army troops. The US Intelligence had predicted earlier, in the last week that Taliban could take Afghan capital within 90 days after rapid gains, as Reuters reported on 11th August. What the world didn’t expect was this rapid fall within days. The question remains, how the rapid advancement of Taliban took place against a country’s national army?

The U.S war in Afghanistan is the longest war in American history which lasted for 20 years. The President of United States, Joe Biden had set a target date of August 31 for the final withdrawal of US forces except about 650 troops to provide security for the US embassy in Kabul. Ahead of August 31 most of the US army troops were withdrawn by the U.S.  The withdrawal is part of Trump- Taliban deal which the former President of United States, Donald Trump had agreed over the final withdrawal of American troops from Afghanistan by May 1, 2021.

As reported by the BBC on 29 February 2020, the deal was signed by US special envoy Zalmay Khalilzad and Taliban political chief Mullah Abdul Ghani Baradar with US Secretary of State Mike Pompeo as a witness. Under the agreement, the militants also agreed not to allow al- Queda or any other extremist group to operate in the areas they control. The deal also provided for a prisoner swap. Some 5,000 Taliban prisoners and 1,000 Afghan security force prisoners were to be exchanged which started with talks between the Talban and the Afghan government. The US also signed to lift sanctions against the Taliban and work with the UN to lift its separate sanctions against the group. The main focus of the United States was to get its troops and diplomats out of Afghanistan safely.

“I hope that with the withdrawal of all foreign forces from Afghanistan the Afghan nation under an Islamic regime will take its relief and embark on a new prosperous life,” said Baradar. Meanwhile US Defense Secretary Mark Esper was in the Afghan capital Kabul alongside Afghanistan’s President Ashraf Ghani whose government did not take part in the US- Taliban talks.

Hence, this gave a sense of legitimacy to the Taliban. It also reached out to regional players, countries like Russia, China and Iran. The U.S had started withdrawing its troops by May 1, officially. In one instance, the US military left Bagram Airfield- its key base in Afghanistan in the dead of night without even informing the Afghan commanders on July 5.

Afghanistan’s former President Ashraf Ghani, a former World Bank economist who has specialization in failed states, could not build a state to hold better command. He was elected in 2014 and re-elected in 2019 as the President. After these elections the U.S had to interfere, to cause peace and unity between him and his rival Abdullah Abdullah. His strategies over the time have lead to weaken anti- Taliban. He was loose in his administration, that he was forced by his American allies to release 5,000 Taliban prisoners to follow a peace deal that he never participated in. The cracks in his administration were visible as the US troops started the withdrawal. He was also in talks with world leaders in his last months as President.

But after the Taliban made advancement in Kabul, it was reported that he left Afghanistan. His government was left completely isolated.  In a statement posted to Facebook, his first since fleeing he said, “Today, I came across a hard choice; I should stand to face the armed Taliban who wanted to enter the palace or leave the dear country that I dedicated my life to protecting and the past twenty years. If there were still countless countrymen martyred and they would face the destruction and destruction of Kabul city, the result would have been a big human disaster in this six million city.

He added, “The Taliban have made it to remove me, they are here to attack all Kabul and the People of Kabul. In order to avoid the bleeding flood, I thought it was best to get out. The Taliban have won with the judgement of their swords and guns, and are now responsible for the honor, property and self preservation of their countrymen.”

Plagued by low morale, poor leadership, corruption many units of Afghan army surrendered to the Taliban.  According to The Guardian, the Taliban had 80,000 troops in comparison with a nominal 300,699 serving Afghan government, yet the whole country has been effectively overrun in a matter of weeks as military commanders surrendered without a fight in a matter of hours. It is tale of two armies, one poorly equipped but highly motivated ideologically, and the other nominally well-equipped, but dependent on NATO support, poorly led and riddled with corruption.

The Taliban strategized carefully after the international troops started withdrawing on May 1. It made its first advancement in the north, northeast and western districts of Afghanistan. After capturing northern districts of Badakshan and Takhar, it turned towards the districts. After which the Taliban focused on capturing the border crossings. They had captured Khan Bandar crossing with Tajikistan, Islam Qila crossing with Iran and Spin Boldak with Pakistan. This might have helped Taliban to keep a check on any help coming from outside. After these capturing it started with the major cities of Afghanistan. Cities such as Kandahar, Kunduz, Mazar- e- Sharif, Ghazni and Herat. Thus, this strategy led to surrounding Kabul which was then easy for the Taliban to reach out to the presidential palace by August 15. Before Taliban reached the palace the President had already left the country for Tajikistan.