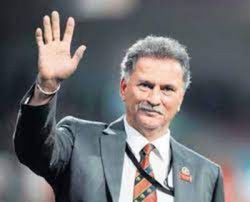 Roger Binny, Former Indian cricket team star and member of the 1983 World Cup-winning team on 18 October was named as the 36th president of the Board of Control for Cricket in India (BCCI).

Binny officially replaced Ganguly as the new president of the BCCI at the Annual General Meeting (AGM) in Mumbai. The former Indian cricket team star, now 67-years-old, was the only candidate to have filed nomination for the BCCI president’s post. Here are some lesser known facts about the ace cricketer-:

1. Binny excelled at multiple sports in his youth; he once held the national record for boys javelin throw, and also represented his school in football and hockey.

2.He has the distinction of being the first Anglo-Indian to play Test cricket for India.

3. Binny was the leading wicket-taker of the tournament with 18 wickets at 18.67, and a strike-rate of 29.3. His spell of four for 29 against Australia helped India reach the semi-final, and he took the all-important wicket of Clive Lloyd in the final.

4.Roger’s debut was against Pakistan in home test series in Bangalore, he also scored 46 runs in the likes of Imran Khan and Sarfraz Nawaz led Pakistan bowling line-up.

5.He has also served as the selector of the national team when he was appointed in the selection panel on 27 September 2012. 6.Binny was the coach of India s successful Under-19 World Cup-winning side of 2000, helping the likes of Mohammad Kaif and Yuvraj Singh shine.

7.Much like Roger, his son Stuart too is a right-handed pace-bowling all-rounder.

9.He is a passionate golfer and loves nature.

10.He has been keen about fishing since his youth and also zealous about rescuing injured and abandoned dogs.