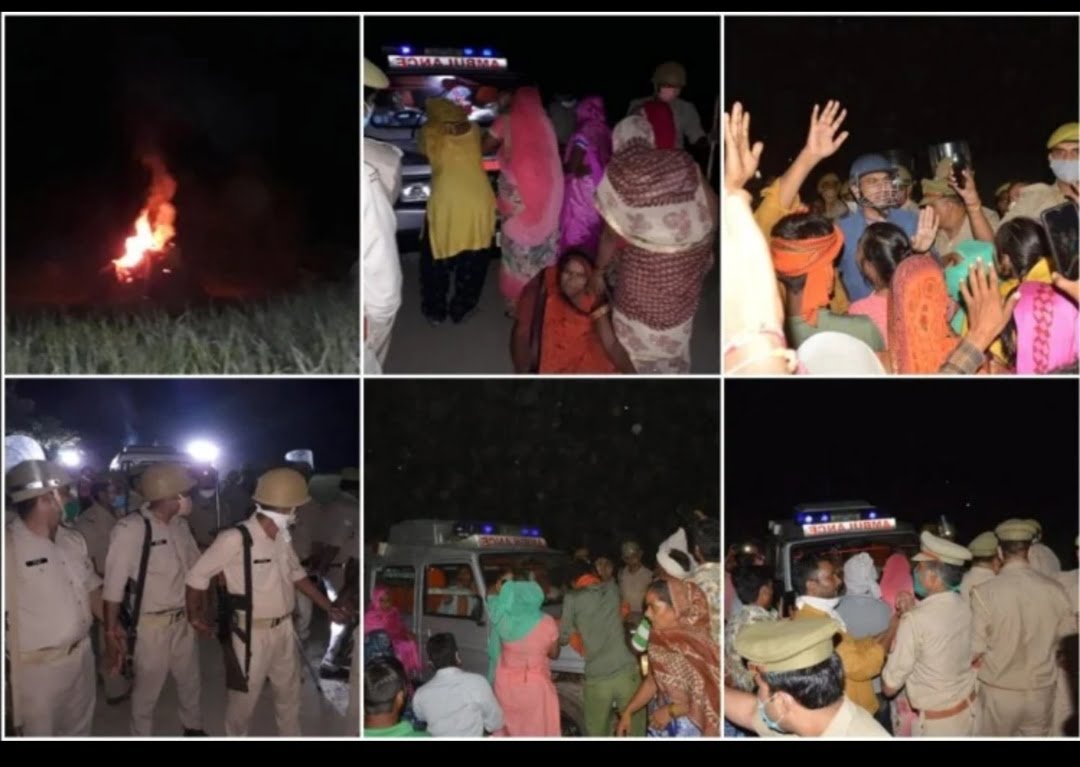 On Tuesday 29 September 2020 a 19 year old Dalit woman who was gang-raped and tortured in Uttar Pradesh, died in Delhi’s #Safdarjung Hospital. The woman belonged to #Chandpa in UP’s #Hathras district. This incident has yet again ignited nationwide outrage and protests at places including #Delhi and #UP.

She died two weeks after the incident took place, and was cremated last night by Uttar Pradesh policemen while her family and relatives were locked up in their homes.

“The woman had gone to the fields along with her mother on the day of the incident, on discovering that she was missing they were searching around the area and found her in critical condition,” said #Harthas Superintendent of Police (SP) Vikrant Vir in one of his earlier statement. He adds, “beside #gang-raping her, the culprits also physically #assaulted her. There was a serious cut on her tongue, indicating that there was an attempt to strangulate her.” She also suffered grave injuries to her spinal cord.

The accused have been arrested by the Harthas police and are currently in police custody. They were identified by the woman as #Sandip, #Ramu, #Lavkhush and #Ravi. Harthas ASP Prakash Kumar said that the accused have been booked under Section 307 (attempt to murder) of the Indian Penal Code (IPC) and later charged with gang-rape under Section 376 D.

Social media has come down heavily criticizing the police for their “negligence” in registering the complaint under gang-rape. There was a delay of eight days, not only in filing the complaint but also in taking the victim to Delhi for treatment. Nevertheless, the DM and SP of Harthras district blamed the family of the victim by mentioning that the women’s brother registered a complaint on September 14 but the gang-rape came to light only after the women’s testimony which was eight days later.

People across the nation are infuriated by the incident and are criticizing the Yogi Adityanath government for this incident. Calling it “inability to control heinous crimes” against women in spite of all their initiatives. Several Dalit leaders Mayawati, Chandrashekar Azad, others like Congress General Secretary Priyanka Gandhi Vadra, Samajhwadi Party Chief Akhilesh Yadav, numerous actors, industrialists and cricketers condemned the incident. In their respective approach of protesting, there were stages outside the Delhi Hospital by Azad Bhim’s party while a candle light march was led by congress workers who were directed by UPCC chief Ajay Lallu in Lucknow.

Around 2:30am, the Hathras police cremated her body while most of her family was at home. At the same time the Police claimed that the cremation was carried out with the family’s consent and also that some of the victim’s relatives were present at the time, turns out that only one uncle was present. However the District Magistrate Praveen Kumar Laxkar said, “We have videos of family members present there. I will be happy to share it with the media. We performed the cremation after the family’s consent. Some of the victim’s family members were present at the cremation.” The media reports are not true, he added. How is the law enforcement taking shape?

As soon as a rape case is reported and it makes it to the headlines nationwide opinions start to overflow all over social media. Posts which read slogans such as “hang them”, “kill them”, “encounter them” etc. For instance the rape case of Priyanka Reddy, a 26-year-old veterinary doctor in November 2019. This case was commonly known as the “Hyderabad gang-rape case 2019” and had sparked outrage across India. Her body was found on 28 November 2019, the day after she was murdered. All four accused had been “encountered” a termed used in India for killing by police. The New York Times reported that police “had been under enormous pressure to bring the rapists to justice.” And this encounter was not only celebrated by the victim’s family but also thousands of Indians who celebrated at the scene of the dead men by cheering for the police, bursting firecrackers at the scene, showering police with flowers, hoisting the cops on their shoulders while cheering “hail the police!.” While politicians thanked the police for the encounter, human right organizations and activists condemned it. If this is how justice is served, then what is the law supposed to do?

After the Nirbhyagang-rape and murder case of 2012, the government came up with new law enforcements with respect to the crimes against women. Various new sexual assault laws were introduced, a mandatory minimum 20 years of imprisonment for gang rape was included, 6 new fasttrack courts were solely for rape prosecution. The government also introduces the “Nirbhaya Fund”, to address the violence against women which is administered by the Department of Economics Affairs. Pink Hoysalas were introduced in Karnataka which are used to patrol the streets for safety of women and children. On December 6, 2019 the government told the parliament that they were going establish 1,023 fasttrack courts or special courts (FTSCs) for expeditious trials and rape cases even that of minors. The Women and Child Development Minister SmithiIrani said that the scheme would cost about Rs. 767.25 crore. And the need of this arouse when it took 8 years for Nirbhaya to get justice.

Even today when a #rape case is reported, it is forgotten that law can take its course and a brutal reply is sought for. If this is the case then why do we ask for #fasttrack #courts or amendments to the existing laws?

Gandhiji once said that “an eye for an eye will make the world blind” and we should have faith in our law and understand that law needs to be respected or else its sanctity for all other things will be lost. While we worry about no immediate action from law, an item song plays on our TV screens and our minds starts to wander towards, dressing, mannerisms and upbringing? Have you spared a thought for this?