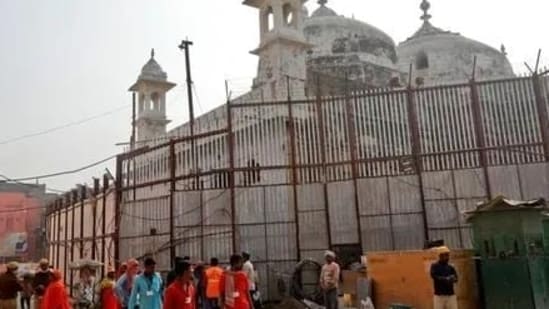 The Varanasi district court on Monday agreed to hear a plea filed by a group of Hindu women seeking permission to worship idols inside the Gyanvapi mosque in Varanasi after the court rejected the petition questioning the maintainability of the above plea.

The situation surrounding the Gyanvapi mosque brimmed with tension as Hindu petitioners cheered at the prospect of their petition being maintained and investigated.

The Gyanvapi Masjid case in brief

The mosque, situated next to the Kashi Vishwanath Temple at Varanasi became the object of controversy after a group of women filed a plea for permission to pray to Hindu deities whose idols are claimed to be located on the outer wall of the mosque. The Anjuman Intezamia Masjid Committee had then claimed that the Gyanvapi mosque is a Waqf property and questioned the maintainability of the plea.

In May 2022, the lower court ordered a videographic survey of the complex to collect photographic evidence of idols of Shringar Gauri and other Hindu deities allegedly present in the mosque after Madan Mohan Yadav, the lawyer representing the women, had maintained the claim that the Gyanvapi mosque was essentially built on the ruin of an ancient Hindu temple.

The report of the filming, later leaked by the petitioners, had mentioned the presence of a shivling in a pond within the complex used traditionally for wazoo, or purification rituals before Muslim prayers.

The case was later transferred from a civil judge to a senior district judge, citing the complex nature of the case.

The mosque management committee had filed a petition at the Supreme court challenging the civil judge’s verdict, also contesting the claims made about the existence of a shivling inside the mosque. The committee further added that the filming was a violation of the 1991 Places of Worship Act.

What did the court declare?

The court held the plea maintainable, thereby rejecting a petition filed by the Muslim side of the dispute questioning the credibility of the claims made by the five women. District Judge A K Vishvesh ordered that it would continue to hear the petition seeking the right to worship in the temple.

Meanwhile, the court has set September 22, 2022, as the next hearing for the plea for daily rituals and puja to be conducted by the petitioners.

The Hindu petitioners on the other hand plan to seek the help of the Archeological Survey of India to establish the existence of a temple in the mosque complex. The petitioners will also resort to carbon dating to understand the time frame of the ruins.