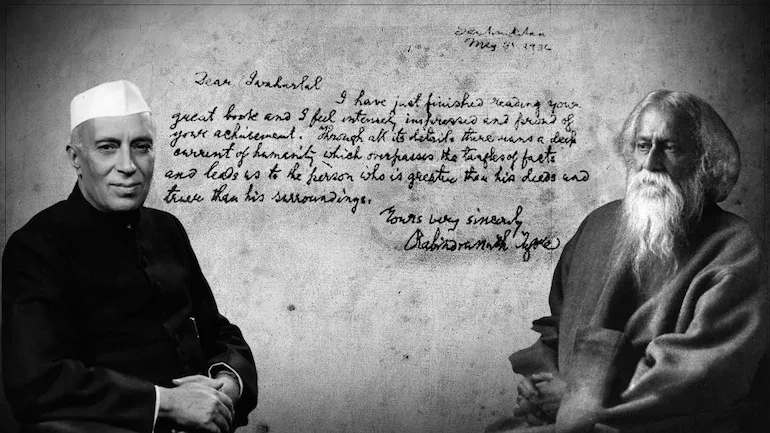 On 30th July 2020, Kerala MP, Senior Congressman Shashi Tharoor shared a post on twitter on which he featured a photo of the letter written by Gurudev Rabindranath Tagore to Pt. Jawaharlal Nehru. The letter was written by Tagore after he finished reading Nehru’s autobiography. The letter was written in the year 1936 and has brought about a sweet sense of nostalgia among historians and literature enthusiasts.

For those who are not big on history, here is a quick brush up. Rabindranath Tagore is a world-renowned writer, poet, composer and painter. He won the Nobel Prize for Literature in the year 1913 and became to the first non-European who was conferred with the award. He also wrote our National Anthem. Jawaharlal Nehru was our first Prime Minister of independent India and is credited for the establishment of Parliamentary government. He was also a prominent freedom fighter in the 1930s & 40s. He was very well known for his nonaligned, neutral policies in foreign affairs.

Interestingly, Nehru called his autobiography as ‘An Autobiography. It is also called as Toward Freedom. It was written when Nehru was in prison between the period of June 1934 and February 1935, during the freedom movement. The book has 68 chapters and is mainly centered around Nehru’s marriage to Kamala Nehru, who was ailing at the time. The book has been translated to over 30 languages.

Tharoor has captioned the picture of the handwritten note as “This was Gurudev Rabindranath Tagore’s note to Pandit Nehru after reading his autobiography in 1936. Extraordinary and exquisite,”. The note in the letter said “Dear Jawaharlal, I have just finished reading your great book and I feel intensely impressed and proud of your achievement. Through all its details there runs a deep current of humanity which overpasses the tangles of facts and leads us to the person who is greater than his deeds and truer than his surroundings. Yours very sincerely, Rabindranath Tagore,”. The post has garnered 6.9 thousand likes and 1.3 thousand retweets.

Anybody who knows Nehru knows that he had quite a flair for writing and receiving letters. He had been pen pals with many prominent personalities like Amrita Sher-Gill (Artist), Sarojini Naidu (poetess), Roamin Rolland (French Nobel laureate) and Tagore, of course, to name a few. After the death of his wife, Nehru had personally written a note to Tagore to thank him for his kind words about her.

Some of the social media users are quite impressed with Tagore’s note and have called him a “literary genius” indeed. They are fascinated by his use of the word “overpass” and his use of open punctuation. In these testing times, sweet throwbacks like these surely remind us of pleasanter times. When people on social media spew unnecessary hate at each other for irrelevant subjects, they should be reminded of the courteous, warm interaction of these legends.

Shakuntala Devi – Do the numbers add up?

SHUTTERS GO DOWN ON BENGALURU’S FAVORITES