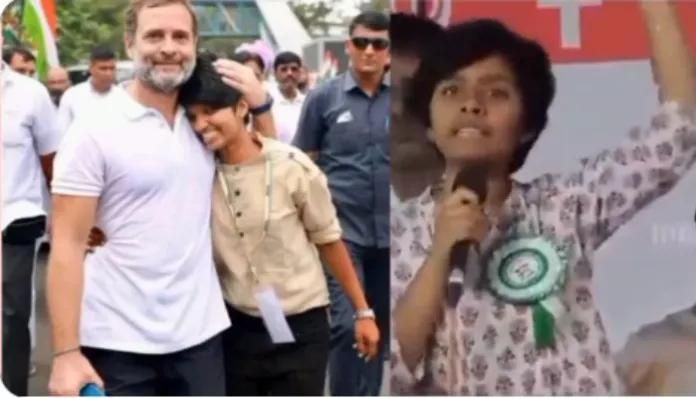 Dubbed as ‘Bharat Jodo Yatra’, Congress kickstarted it’s 3,570-km march from Kanyakumari in Tamil Nadu on September 7 this year. The march will last over 5 months and will cover 12 States before terminating at Srinagar.

In February 2020, Amulya Leona Noronha created a ruckus during a public meeting of AIMIM chief Asaduddin Owaisi. She raised slogans of ‘Pakistan Zindabad’ and was attempting to say more but was dragged off the stage by those present.

She was booked under Section 124A (Offense of sedition) of the Indian Penal Code (IPC) and initially sent to 14 days in judicial custody. After the picture started doing rounds on social media platforms, media portals tried to confirm whether Mr.Gandhi actually met Amulya Leona, and as it turns out that is not Leona but the picture is actually of one Miva Anreleo, who is a KSU leader. KSU The Kerala Students Union (KSU) is a students organization in Kerala, India. It functions as the student wing of the Indian National Congress in the state. Miva had posted the picture on Instagram 2 days ago, saying that it was the happiest day of her life as she met her own ‘RaGa’. She also later posted a video of her encounter with Rahul Gandhi.

In this article:#RahulGandhi, Fact check