A video has gone viral on social media showing a group of Lord Ayappa devotees singing praises for Allah at Sabarimala temple. A man is seen chanting the prayers, and he is followed by a group of other devotees. The video was recently circulated on social media and Twitteratis condemned such a portrayal of ‘secularism’.

South India for you.

These Ayyappa devotees are chanting praises for Allah at Vavar mosque in Sabarimala. The same Sabarimala where Sanghis tried to instigate riots in Kerala pic.twitter.com/BCVlPdFcAz

I am bored of such videos where Hindus go out of their way to display secularism. Show me a video where an M is chanting praise for lord Ayyappa.

In the video, the man is shown chanting“La Ilaha Illallah, Vavar Swamy Mohammed Allah”, along with Lord Ayappa’s prayers. The caption in Hindi along with the video translates to, “Do not press the button of the red symbol. See what’s happening in an Ayyappa temple. Are the priests and other temple committee members sleeping? Why isn’t anyone opposing this?” 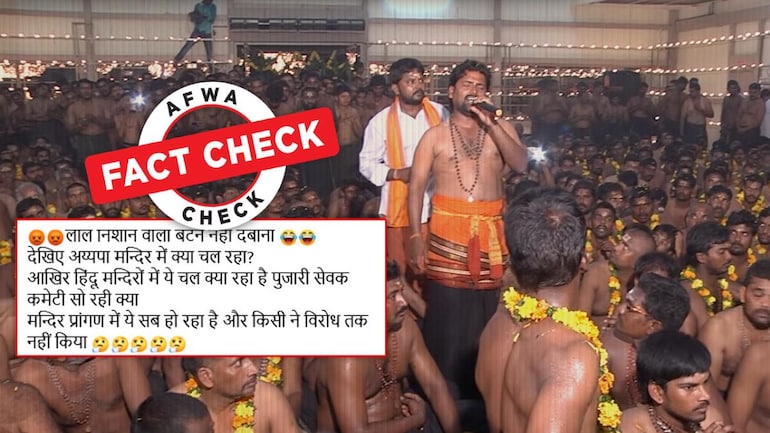 The same video was posted by a user ‘SBR news1’ in 2019. The caption of the video read “La ilaha illallah ayyappa swamula songs’.

However, the video is not from Sabarimala. Also, this is an edited version, and in the original video, the man can be heard singing in praise of Lord Ayyappa and Vavar Swami, a Muslim by faith. As per legend, Vavar Swami was a close associate of Lord Ayyappa.

With the help of keyword searches on Facebook and YouTube, fact-check of India Today found longer versions of the same video uploaded by several users since 2017. In this longer version, we can hear the man singing in praise of both Lord Ayyappa and Vavar Swami in Telugu. This video is from Chalasani Gardens, a function hall in West Godavari district of Andhra Pradesh.

India Today also found multiple videos of the man on a YouTube channel called “N.balajiswami ayyappa swami bhajanalu”. While the viral video could not be found on this channel,  another video of the same man was found, where he was singing the same prayer at a different location.

A comparison of the two videos on Google Maps confirmed that the original video is indeed from Chalasani Gardens in Andhra Pradesh, and not the Sabarimala temple.

It is clear that the video is not from the Sabarimala temple, and a cropped version of a longer video is circulating with a misleading narrative on social media. The viral claim is partly false!