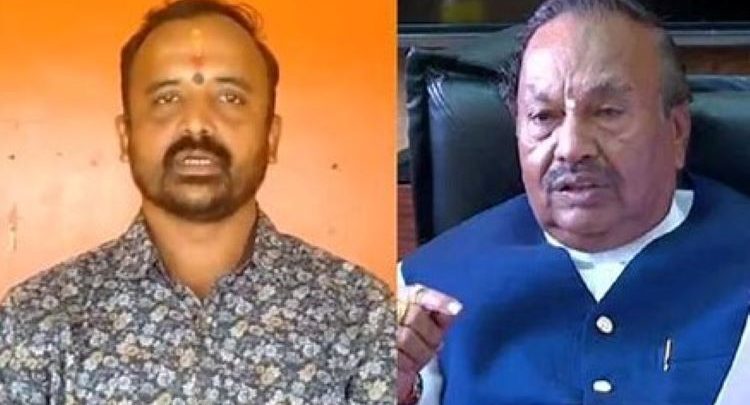 Karnataka’s Minister of Rural Development and Panchayat Raj-K.S Eshwarappa announced his decision to step down from the cabinet yesterday, in connection with the murder of a contractor and BJP worker. He will give his resignation today to Chief Minister Basavaraj Bommai.

On Wednesday, the minister was charged with abetment of suicide of contractor Santosh Patil. He had accused Eshwarappa of corruption in a Udupi lodge. When an FIR was filed against him regarding this, he ruled out quitting and said that he was the victim of a conspiracy.

Where is BJP RSS Bajrangdal Shri Ram Sene ? Why they r not protesting now? Why they are silent on #SanthoshPatil Suicide because of BJP Kar’ka Minister Eshwarappa? Why no any bjp Leaders visited his family? Sanghpariwar is a fake Hindu. #JusticeForSanthoshPatil #ArrestEshwarappa pic.twitter.com/e6iGsAxZbO

The death of the contractor led to political turmoil in Karnataka, as opposition Congress leaders launched protests demanding Eshwarappa’s resignation as well as arrest. The party had launched a dharna for 24 hours and demanded a judicial probe. The contractor’s family also called for immediate action. At the turn of events, the BJP high command advised the minister to resign ahead of J.P Nadda’s visit for the two-day state executive meet.

They can't protect one of their own workers from the predators present in their own party. How can they be expected to protect and run a whole country? #ArrestEshwarappa pic.twitter.com/YvBuHghdWE

On Thursday evening, Mr. Eshwarappa called a last-minute press conference and said,” I will submit my resignation tomorrow at Bengaluru to avoid any embarrassment to the party, leaders, and the Chief Minister.”
However, he maintained that he had no connection with Santosh Patil’s death or his corruption allegation. The Karnataka Chief Minister has said that the police will decide on the arrest of the former RDPR Minister regarding the contractor’s suicide.

Speaking to media persons in Hubballi on April 15, Mr. Bommai said, “Congress leaders need not become the investigating officer, prosecutor, and the judge in the Santosh Patil suicide case. Let them allow a free and thorough investigation.”

He added, “There are no personal issues in the case. The question of a setback does not arise.”On the demand for the arrest of Mr. Eshwarappa, he said that in the case of former minister K.J. George, who faced charges in the death of police officer Ganapathy, both CBI and police did not arrest him.

The Congress party has one simple demand: #ArrestEshwarappa.

The BJP government in Karnataka is letting a corrupt politician accused of abetment of suicide roam freely.

What kind of a depraved example is it setting for the nation and its citizens? pic.twitter.com/IgCM3zHoYI

On whether the RDPR Minister would be convinced to change his decision to resign, Mr. Bommai said Mr. Eshwarappa was clear on his decision and he is confident of coming out clean in the case. On allegations about a conspiracy in the case, he said that the police investigation would cover all the angles to unearth the truth.
#ArrestEshwarappa is trending on Twitter. The Congress party’s official Twitter handle at the national level and state levels are spreading the news like a wildfire.