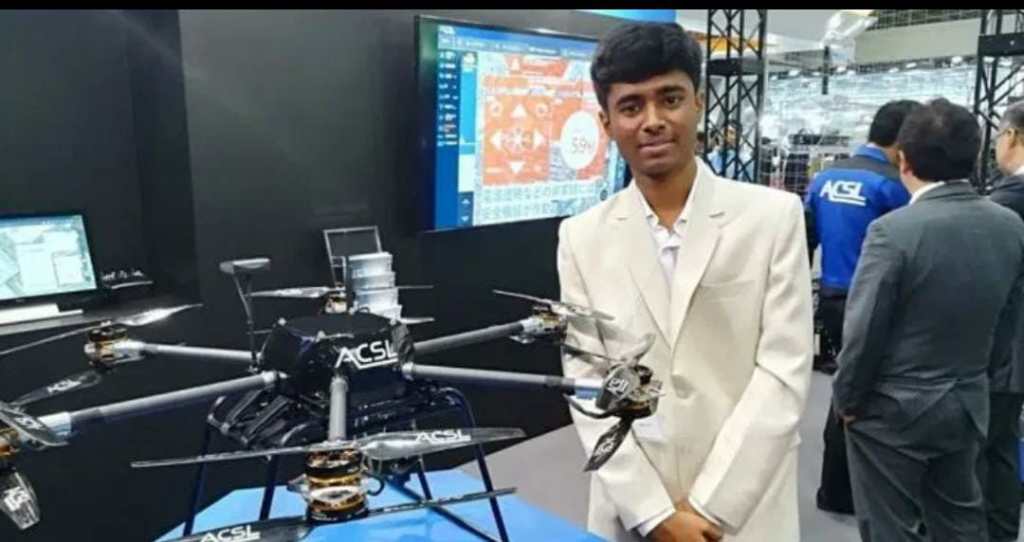 The story of Drone Pratap doesn’t fall short to a cinema script – one that is larger than life and too good to be true. A small town boy from Karnataka, who went on to be a sensation in the field of aerial unmanned vehicles, sounds inspirational – an underdog story you want to back with all your heart; but how true is this story of Pratap is the hot topic that everyone has been talking about.

If you haven’t heard of Pratap or been an audience to his emotionally heavy speeches, here is some context. Pratap or Drone Pratap is a budding ‘scientist’ from Mandya, Karnataka. He came into light in 2017, for having researched, built and flown drones in International competitions, winning a lot of medals and accolades. The Kannada media backed Pratap and celebrated his success, which brought in lot of fame and Government recognition. Soon, YouTube, Instagram and WhatsApp were filled with the success story of Pratap and the speeches he delivered at colleges and events. Pratap’s speeches were emotionally heavy, dramatic and filled with anecdotes that gave goosebumps to his audience. Pratap was the golden boy of Karnataka, who every mother wished was her son. Everything he touched turned to gold, until recently a series of allegations surrounded him, questioning the genuineness of his success and that is when people started to take notice of the mountain of flaws that they had never paid attention to.

Kannada actor Jaggesh, who had backed Pratap in his initial days, took to Facebook to express his disappointment and anger towards the scam that Pratap had subjected him to. People were shook by this sudden discovery about Pratap and the Internet did what it does best – made Pratap the meme trend of the month. Drone Pratap was now Kaage Pratap whose speech snippets were the meme content for trollers. Few meme pages crossed the line, when they tried to spread news about Pratap dying by suicide.

Pratap, in his own words, had to break his period of quarantine, travel back to Karnataka during the Pandemic and attend an interview in a Kannada media channel to clear the air of controversy around him. Here are few points, from a three hour long interview of Pratap, where he came clean about few of his mistakes and also defended the rest.

Pratap and his struggle to fame:

Pratap, who was discovered to a be a Bsc in CBZ student with questionable grades claims to have worked in a cyber café in his hometown where he read more than 70,000 research papers and learnt many coding languages, in two years, without any guidance. It is now being discussed, if a person can humanly achieve this feat where they consume knowledge at that rate. Pratap came clean, that he only read the abstract of 70,000 papers and didn’t learn coding languages completely, but these were enough for him to research and build drones.

Pratap’s story of him having to struggle on the roads of Chennai to get a signature of approval from a renowned professor had touched people’s heart. However, the questions arose when Pratap claimed to have stayed hungry, without eating a single meal for almost 8 days during this period. Again, people were doubtful of Pratap’s super human abilities.

The Drone boy of Karnataka claims to have travelled to 87 countries, spoken at 313 conferences, won 3 International gold medals with his drones and have recognition from 4 countries as a renowned ‘Young Scientist’. People dug deep into these competitions that Pratap claims to have won, with many discovering that no such event exists and even if it did, the drones in Pratap’s photographs were from commercial companies.

Superhuman feats of Pratap continues in this phase of life too, where he claims to have carried 360 Kgs of luggage to Japan on a commercial aircraft and physically carried this load all by himself from the airport to the event arena. Pratap also claims to have gotten a free ticket worth 7 Lakhs from the airport authorities in France when he missed his flight and didn’t have the resources to book another ticket.

IIT, IISC, Harvard, Oxford, University of Columbia, Imperial University in Japan are few of the many renowned institutions where Pratap claims to have been a guest speaker, talking about his research in the field of drones. Oh, by the way, there is no research paper or patent in Pratap’s name as he fears people might plagiarize his work, or use it against his philanthropic vision.

The Black Mamba and the supersonic drone:

During his project with the Red Cross association in Africa, Pratap’s supersonic drone, which is the first of its kind, travelled a distance of 300-400 Kms in under 9 minutes to deliver anti venom medicine to a tribal girl who was bit by a black mamba. Pratap’s drone, which matched speeds of a supersonic vehicles has no registration or paper on it, as Pratap is under confidentiality clause that he cannot talk about.

With all these anecdotes that are logically hard to fathom, and are only backed by the certificates Pratap carries, it is amusing to see how a 23 year old managed to scam/con an entire state and its government (if Pratap’s claims are not proved). Pratap has vowed to soon come up with proof and justification for all his claims and also build a drone on live television to prove his mettle. Only time and patience will answer all our questions about Karnataka’s Drone man Pratap.

CANCEL CULTURE- THE GOOD, THE BAD AND THE UGLY

THE HISTORIES AND MYSTERIES OF PADMANABHASWAMY TEMPLE