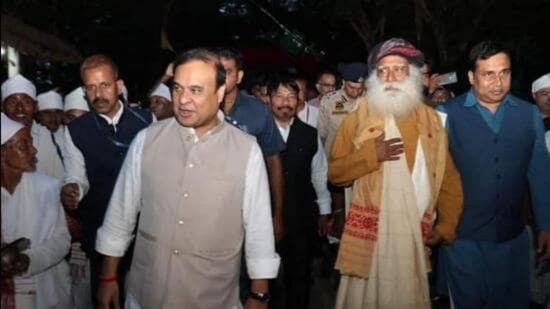 “The law should be equal for all. Jeep safari inside the park during the night is prohibited for tourists but Sadhguru and Sarma took the jeep ride at night. The relaxation of the rules for them would remain a threat for protection of Kaziranga and and its animals. So the police should show its fundamental duties by arresting them for violation of the Wildlife Protection Act,” Narah and Pegu, belonging to the Mishing tribe, said in the complaint. 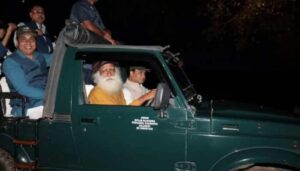 “There is no violation. According to the wildlife law, the warden can give permission to enter a protected area even at night. No law stops people from entering at night. Yesterday, we had the formal opening of the park for this season and now that Sadhguru and Sri Sri Ravi Shankar had arrived, and since they have lakhs of followers, this time we expect the tourist season will be very good for Kaziranga,” Mr Sarma told reporters.

The spiritual guru courted controversy by driving a safari vehicle for about two kilometers inside the tiger reserve after the inauguration of a rhino memorial two hours behind the 3.30 pm schedule on Saturday. The ashes of 2,479 rhino horns burnt a year ago went into the construction of the memorial. Mr. Sarma was in the passenger seat while Mr. Baruah sat in the back of the vehicle along with officials and guards. Mr. Baruah also took to social media announcing the opening of Kaziranga for tourists, hours after the State’s Principal Chief Conservator of Forest, M.K. Yadava said the national park would be opened on October 15.

Environment activist Rohit Choudhury took to Twitter and stated that the jeep safari could be a violation of Section 27 of Wildlife Protection Act, 1972 which is related to restrictions on entry in a protected forest area.

However,  Director of KNPTR, Jatindra Sarma said that the jeep safari didn’t take place at night. “It was a scheduled programme and was to take place at 3:30pm, but it got a bit delayed,” he said.

People on social media criticized Sadhguru, Mr. Sarma and Mr. Baruah for driving inside the national park beyond the scheduled hours.