CANCEL CULTURE- THE GOOD, THE BAD AND THE UGLY 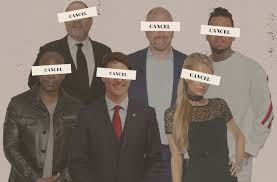 If you’ve spent enough time on twitterverse you’re at least aware of the word “cancelling.” Cancel culture is a term that is so ubiquitous that it’s hard to escape. The most common definition of is “Cancel culture refers to the popular practice of withdrawing support for (canceling) public figures and companies after they have done or said something considered objectionable or offensive. Cancel culture is generally discussed as being performed on social media in the form of group shaming.” Despite being used all the time, the word cancelling has many definitions attached to it and is vague enough to be applied to a variety of situations ranging in intensity and offence. Cancel culture first started on Black Twitter when women began to tweet “Cancel R. Kelly” for his long history of sexual misconduct with women.

Soon, Cancel culture or call out culture began to be accepted and used as a means to call out powerful men in power during the Metoo movement which saw a long list of cancellations or call outs of men who were accused of sexual assault or predatory behavior. It began as a means to give voice to the voiceless and decrying the system that turned a blind eye towards sexual assault if the accused in question had enough money and power to back him.

The MeToo movement was started by Alyssia Milano who tweeted “If you’ve been sexually harassed or assaulted write ‘me too’ as a reply to this tweet.” And thus began the flurry of hashtags that revolutionised the way we hold people accountable and give voices to victims who were previously silenced.

Part of it had to do with Twitter as a platform that democratized speech and paved the way for ordinary people to reach thousands online and has made it possible for anyone with an internet connection and a twitter account to talk to and raise their voice online in solidarity with others who echo their sentiments or offer support to them. Social media has made it possible for the ordinary citizen to call someone out, to voice discontentment, injustice and protest.

Twitter has revolutionized protest and by making 140 characters available to everyone with a account, it is no brainer that this sphere welcomed social justice movements like the MeToo movement and cancel culture. Adam Sharp, Twitter’s head of government, news and election department noted that “I think it was less Twitter coming to politics, and more politics coming to Twitter and finding it as a platform to communicate and to organize effectively without a lot of the costs historically associated with that.”

Since then, cancel culture has been in full swing. Recently, J.K Rowling was cancelled on twitter for a few tweets that had denounced the legitimacy of trans people and had hurt the sentiments of the trans community. Although, Rowling claimed that the tweets were mere made in support of trans people and their rights, Twitter was quick to denounce Rowling as a bigot and criticise her views on transgender people. Similarly, Jimmy Fallon the host of the tonight show was recently criticised for donning blackface years ago in order to impersonate Chris Rock. While, Ryan Adams was recently called out on twitter for having a sexual relationship with a minor.

However, there is a dark side to twitter and cancellations. While Cancel culture might seem like an important tool to help give voice to the minorities online and help dissent against the unfair systems that favour heterosexual, cisgender men over others, it can also be used to direct disproportionate amounts of hate and bullying towards people who commit minor transgressions online.

The important question to ask is whether online bullying/shaming an appropriate response to bringing systemic changes within our society? If so, does merely telling a joke in bad taste warrant massive amounts of online bullying and death threats. Do people deserve to be sacked for jokes? Is cancelling a measure response to a joke that is sometimes taken out of context?

Perhaps someone of J.K Rowling’s stature is able to bounce back from ‘cancelling” but smaller content creators may not. Cancelling on twitter can sometimes dehumanize the person on the other end of the screen. Merely seeing an online persona and a twitter icon can sometimes reduce people to their ignorance, or the bad joke that they made years ago. It’s easier to bully people online because we can’t see them face to face.

While cancelling may be an effective way of calling people out problematic behaviour in twitter, it can also adversely harm someone’s mental health and sending angry, twitter vigilante justice mobs towards people may sometimes do more harm than good to the cause of social justice.

Recently Harper Bazaar published the letter signed by 150 signatories most of which were public, intellectuals and thinkers such as Noam Chomsky, Margaret Atwood and Gloria Steinham, who warned that free speech was in danger and that cancelling could have adverse effects on self-censorship and could possibly inhibit new ideas from coming to the public sphere because of the censorship associated with cancelling. This has started a new, polarizing debate on twitter the past few weeks and has made us reconsider the good, the bad and the ugly sides to the internet phenomenon known as cancelling.

THE UNSPOKEN SIDE OF INDIA’S COVID FIGHTING STRATEGIES