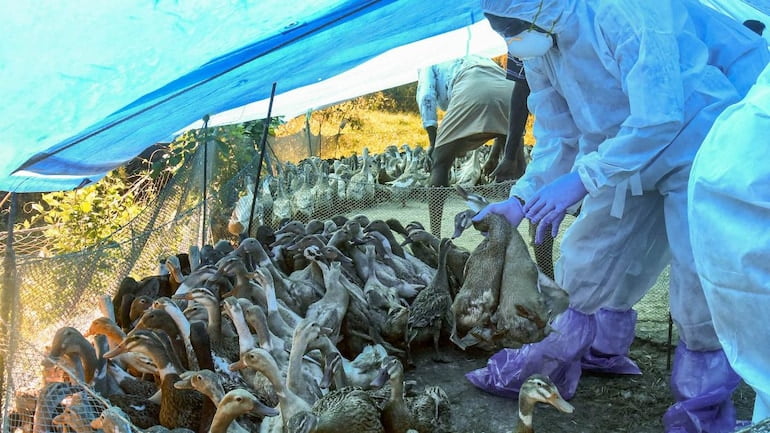 In India, there have been cases of bird flu taking place since quite a while now. Cases have been reported among wild geese and 1,800 migratory birds in Himachal Pradesh, crows in Rajasthan, ducks in Kerala and poultry birds in Haryana.

What is Bird Flu?

Avian Influenza or bird flu is a highly contagious viral disease caused by the Influenza Type A viruses which affects poultry birds like chickens, ducks and turkeys. There are many strains of the virus; some mild, that can lead to low egg production or other mild symptoms among chickens, while others can be severe and lethal.

Some Cases of the Past

India witnessed the first outbreak of Avian Influenza in 2006, which effected parts of Maharashtra and Gujarat. Soon after, Madhya Pradesh also witnessed cases of the same. A total of 10.44 Lakh birds were culled to control the spread of the virus. The country managed to get rid of the virus in August the same year.

However, India couldn’t do its victory dance yet. In 2007, Manipur reported cases of bird flu in its East Imphal district. Right after, in 2008, West Bengal witnessed a massive influx of the virus that affected about 15 districts. 42.65 birds were culled to contain the virus. In the same year, the Avian Influenza also reached Tripura and Assam.

In 2009, South Sikkim confirmed cases of the virus and the following years, so did West Bengal and Agartala. Subsequently, every year saw an influx in cases and culling of birds in Uttar Pradesh, Telangana, Kerala, etc. and this year is no different.

How the Avian Influenza spread and what makes India Vulnerable

Wild aquatic birds such as ducks and geese are the natural reservoir of Influenza A viruses and the central players in the ecology of these viruses. A number of birds carry the flu without developing symptoms of the virus, and shed it in their droppings. Since birds excrete even while flying, they provide “a nice aerosol of influenza virus, shedding it all over the world”, in the words of American virology professor Vincent Racaniello. From water birds, many of whom migrate and travel long distances, the viruses are thus further spread to poultry and terrestrial birds.

India has a high density of poultry population, with six mixed breading of ducks and chickens. It also has three flyways of migratory birds that pass through the country annually. India also witnesses the illegal movement of poultry and its products from possibly infected areas throughout the country. Experts also suggest that India has inadequate bio-security and sanitation in backyard rearing, making it vulnerable to the virus.

According to the World Health Organization (WHO), humans who come in contact with infected birds are at risk of contracting the virus. There have also been fatalities in people who have contracted the virus. If infected, symptoms include respiratory issues, fever, cough, cold, sore throat, abdominal pain etc. The Union Health Ministry has advised those working closely with poultry to wear PPE suites. However, the WHO maintains that the Avian Virus does not spread from person to person. There is also no evidence, which the disease can spread to people through properly cooked poultry food. Research states that the virus is sensitive to heat, and dies in cooking temperatures.

According to the Union Health Ministry, no cases have been detected in Indians. Experts state that the Avian Virus is not something to fear, as it is not contagious. There will be a reason to fear if the virus mutates and becomes transmittable, which could then possibly lead to a pandemic.

Rush for Vaccine : Everything you need to know about Covaxin and Covishield