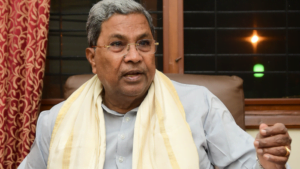 A woman threw the money at his car while he was done visiting the victims. The money was given to the woman by the leader as compensation for her husband’s injuries sustained during the violence. While throwing the money, the woman said, “What we want is justice, not any compensation or sympathy. Whatever happened to me shouldn’t happen to anyone else. I can’t beg every day for relief from Siddaramaiah or anyone else who comes to beg for votes.”

#WATCH | Karnataka: A woman, whose husband was injured in recent Kerur violence, threw the money that was given to her as a relief amount by Congress leader Siddaramaiah, at his vehicle today in Bagalkote. He was visiting a hospital to meet the people who were injured in violence pic.twitter.com/if8YqScyBT

Her husband, Mohammad Hanif, was injured during the Kerur violence incident. She further said, “After the incident, my husband needs to take at least one year of bed rest. Who will take care of my family? What I request is justice. I need justice, not compensation or sympathy,”

Earlier this year, violence had broken out between Hindus and Muslims in Karnataka’s Bagalkot last week. According to police, the incident started on July 6 when workers from a Hindu right-wing organisation (reports state Hindu Jagarana Vedike) confronted a Muslim youth.

According to the workers, the Muslim youth, identified as Yasin, had allegedly teased several Hindu girls. The confrontation soon led to a heated argument. The incident was further aggravated when Yasin brought more people with him and assaulted the men who confronted him.

Soon the Hindu group retaliated and four people were injured in the clash. The authorities quickly imposed Section 144 in the area. The police arrested a total of 18 people.